King orders second vote after first ends in a deadlock. 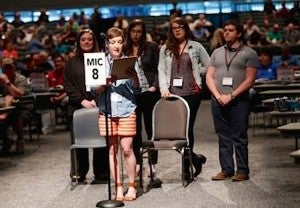 Delegate Eden Shultz from Local 2110 speaks on a proposed constitutional change during debate on Tuesday in Detroit. Photo credit: UAW.

The United Auto Workers approved a dues increase for 391,000 members, but the two-and-a-half-hour debate during the union’s quadrennial Constitutional Convention underscored the dissatisfaction within the union ranks over the two-tier pay system that now prevails in much of the auto industry.

“We need to have a war chest if we’re going to be serious about breaking the two-tier system,” said Brian Schneck UAW Local 259 in Hicksville, New York, who spoke of in favor of the increase that boosted dues from two hours wages per month to 2.5 hours per month.

The vote was closer than the union’s executive board might have liked. When UAW Bob King called for a voice vote it failed to pass as the opponents shouted out their opposition. The increase was approved a few moments later on show of hands.

It was the first time the union had increased dues since 1967 and follows a pattern set by other unions in recent years, including the Teamsters and United Steel Workers. The increase will mean members will pay an additional $10 to $17 a month in dues.

Jim Stanton, a delegate of UAW 1112 of Lordstown, Ohio, also said the union need to raise dues to fight back.

“Its about our ability to fight for justice,” said Stanton, one of the 40 delegates to participate in the debate: 20 in favor of the increase and 20 against.

“We’re under attack from all these organizations are spending millions of dollars to try and kill us off,” he said, pointing to the massive spending by the organization financed by the Koch brothers and other conservative organizations.

Delegates on the other side of the issue suggested that the union had to first address the two-tier system head on before it could ask members for dues increase that has divided the union’s membership.

Rich Boyer, a Local 140 delegate from Chrysler’s Warren Truck Plant, warned the union will “be in trouble” if the it does not negotiate to eliminate two-tier wages with Detroit automakers in 2015. Automakers, led by Chrysler chief executive officer Sergio Marchionne, have indicated they would like to maintain the current second tier wage of $15.78 per hour and “freeze” the wages of senior workers who now make $28 per hour, but haven’t had a raise since 2003.

(GM death toll for recalled vehicles may be 74 people. For more, Click Here.)

Marchionne said he would like a new system that places a greater emphasis on profit sharing. About 40% of the Chrysler workers are now on the second tier.

(Click Here for details about trucks and SUVs leading May auto sales.)

King and Dennis Williams, the UAW’s presumptive next president, waged an extensive campaign during the last six months in effort to sell the dues increase, setting out several different arguments, including a promise all the extra money would be placed in the UAW’s strike fund.

(To see more from the UAW’s convention in Detroit, Click Here.)

However, King acknowledged during the debate that money from the strike fund will be used to restructure the union’s finances, notably paying for a VEBA for union staff members, for expensive organizing drives in the South.

Williams, who will be installed Thursday, said the “outreach” program had paid off with the positive vote in favor of the dues increase.