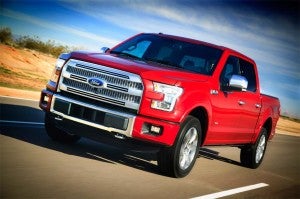 The improved fuel economy of full-size pickup trucks, like Ford's F-Series, have pushed trucks to the top of the lists of new vehicle buyers recently.

It’s been one of the nation’s most popular models in recent years – in fact, topping the charts for two years running in the critical California market – but you might not know it from the April sales charts. The Toyota Prius just barely managed to make it into the Top 20 for the month.

And Prius wasn’t the only sign of a shift in the U.S. automotive marketplace, as shoppers seem to respond to relatively stable fuel prices by putting more attention on trucks – especially full-size pickups – and crossovers.

But don’t feel sorry for Toyota. The maker managed to plant three of its models among April’s 10 best-sellers, the original Prius hatchback making it four out of 20, according to an analysis of the month’s sales by tracking firm Autodata.

Large trucks have been gaining momentum for more than a year now, showing momentum even when fuel prices hit an all-time peak in many parts of the country during early 2013. A reviving economy has played a major role, truck buyers today largely looking for work vehicles, rather than the gas-guzzling playthings of the Urban Cowboy era.

The top selling vehicles in April were:

It has helped, of course, that newer powertrain technologies have produced significant improvements in fuel economy. Ford, for example, now sells more V-6-powered F-150s than it does V-8 models, and the maker has intimated it will deliver even bigger mileage gains when it launches the aluminum-bodied remake of the F-150 for 2015.

The current model was well and away the nation’s best-selling vehicle in April, good news for a Ford that saw an overall decline of 1% in April sales. In fact, the maker noted that demand for both the F-Series and for the Ford Explorer SUV reached their highest levels in nearly a decade last month. Explorer came in 19th on the April sales chart. Ford also landed the ninth-ranked Fusion, and the 11th-ranked Escape.

(Mulally on Ford on Fields. For more, Click Here.)

Its Focus model was in the 17th sales slot, but that was a slide from recent months, and it reflected a sharp 15.9% dip in year-over-year sales for the compact model.

The Prius suffered an even sharper, 18.5% decline in April. Hybrids, in general, have been losing momentum as consumers shift focus away from fuel prices and finding mileage-misers.

(Click Here to check out the strange warnings Tesla owners are getting in San Francisco.)

That said, Toyota’s recently redesigned compact model, the Corolla, came in at sixth, but the bigger Camry – and Honda’s midsize Accord – were well ahead. Only three compact passenger cars, a group that included the Hyundai Elantra, made it into Autodata’s Top 20 last month.

(To see more about John Krafcik being named president of TrueCar, Click Here.)

Meanwhile, the F-Series was followed closely by two other full-size pickups, the second-ranked Chevrolet Silverado and the fourth-ranked Ram.

The rest of the monthly top-seller list was largely dominated by midsize sedans, and a mix of midsize and compact crossovers.