New Audi Plant Rises Out of the Mexican Dust

German luxury maker takes a $1.3 billion risk with next Q5. 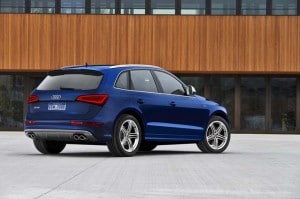 The next-generation Audi Q5 will be produced at the maker's new Mexican assembly plant.

A steady stream of trucks roars across the parched field kicking up swirls of dust. The new Audi assembly complex is quite literally rising out of the high plains desert, an hour outside of the city of Puebla, the maker pouring another 19 feet of soil atop the two square miles of barren land it is has acquired for the project.

Audi is the latest in a fast-growing line-up of manufacturers to invest in Mexico, the maker drawn to the country for both its low labor costs and, perhaps more importantly, the numerous free trade agreements the Mexican government has negotiated.

That will make it easy to use the new, $800 million plant as the sole source for the maker’s next-generation Q5 sport-utility vehicle. Indeed, Audi has already laid out plans to double the factory and shift even more production there from Germany.

“This marks the point at which we will build more cars outside Germany than at home,” notes Klaus-Peter Koerner, who will manage production at the facility when it opens in mid-2016. 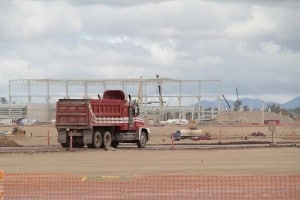 More than 1,000 trucks a day rumble across the 2-square-mile complex.

But he also cautions that there are plenty of risks. While mainstream manufacturers, such as Ford, Honda, Chrysler, Nissan and even Audi’s sibling brand Volkswagen, are already building cars in Mexico, “We will become the first premium carmaker here, so all eyes are on us.”

That’s one reason why it will ultimately take about three years to get the project off the ground, Audi officials explain. They are investing a significant amount of effort to make sure that not only is the new Puebla plant built to their exacting specifications, but they’re also carefully vetting the manufacturers who will supply parts for the new Q5.

Audi expects to use Mexican-based suppliers for at least 70% of the new Q5’s parts when the operation launches, with a goal of reaching at least 90% long-term.  Each potential supplier is undergoing a rigorous inspection, even those who have already proved themselves out by supplying the massive Volkswagen plant just an hour away.

The VW factory, capable of producing more than 700,000 vehicles annually, has been in operation for more than half a century. The all-new Audi facility is intended to be a state-of-the-art showpiece, even more advanced than the assembly plants the maker runs in Germany. 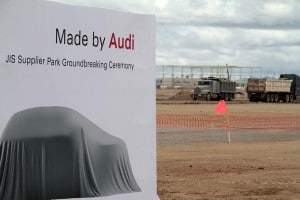 A number of key suppliers will be based on Audi's plant site.

Among other things, the Puebla complex will include a special park housing seven key suppliers, including Faurecia which produces exhaust system modules, front end module manufacturer HBPO, and Ficosa which produces exterior mirrors.  It’s rare for suppliers to be located on a carmaker’s property. But what really matters is how they will be required to operate.

It’s already relatively common for suppliers to be producing parts Just-in-Time, that is, shipping components to the factory only as they are needed, to reduce inventory levels. Thyssen Krupp, which produces front axles and other parts for Volkswagen, has to assemble and ship parts to the plant in Puebla within two hours of receiving orders.

“The thing we have the least of is time,” explained Jose Sanchez Fornaguera, the COO of Thyssen’s Mexican operations.

The Audi supplier park will allow parts to be assembled Just-in-Sequence. In other words, when a palette of mirrors or exhaust systems arrives at the assembly plant, each part will be stacked in the same order Audi will assemble them onto the cars rolling down the line.  And considering the fact that there will be potentially dozens of different requirements – the catalytic converter used in China won’t be the same as one for the U.S. or Europe, for example – it could be disastrous if the supplier makes a mistake. 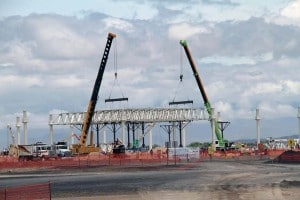 But Audi isn’t expecting to make many mistakes as it gets ready to put the Puebla plant into production. The facility will become a critical part of the Volkswagen AG subsidiary’s global growth plans. VW itself hopes to push past Toyota to become the world’s largest automaker before the end of the decade. And Audi is now the globe’s second-largest luxury brand, with a goal of topping leader BMW.

(VW likely to delay – but not abandon – ambitious U.S. sales targets. Click Here for the story.)

Considering the growing demand for compact and midsize utility vehicles everywhere from Berlin to Boston to Beijing, the Puebla project is critical. And costly, at a total $1.3 billion, including the cost of both the plant and the development of the next-generation Q5.

But as the size of the Puebla complex suggests, Audi has even grander plans in mind. “We have chosen the land so we may even double production” in the near-future, Audi AG Board Member Bernd Martens told TheDetroitBureau.com. That would very likely include the addition of still more products for Puebla, which will initially have a capacity of about 170,000 vehicles annually.

Audi spent a number of years debating where to put the new Q5 plant and initially was expected to build it in the U.S. But, like a number of other manufacturers, it shifted to Mexico which is today the seventh-largest exporter of automobiles in the world and likely soon to rise to number six. 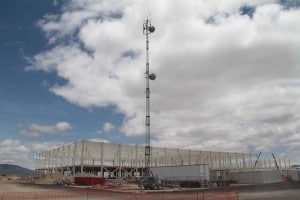 The plant could eventually be doubled in size.

Cheap labor certainly didn’t hurt the case for Mexico, but it also has negotiated more free trade agreements than any other country except Israel, Martens noted, and that is a critical advantage for Audi, since it means Audi will be able to export all over the world without export duties that means the Q5 can be sold at a much more competitive price.

Audi may be the first luxury brand to commit to Mexico but it likely won’t be there alone for long. BMW is expected to announce plans for its own Mexican operation this year, and Mercedes-Benz may follow soon after, CEO Dieter Zetsche has suggested. Meanwhile, Nissan’s new plant in Aguas Calientes could be doubled in size to handle several new models for the Japanese maker’s own luxury brand, Infiniti, before the end of the decade.