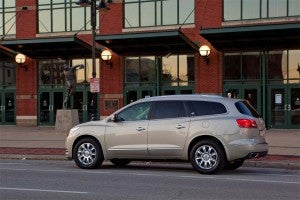 Among the latest GM models to face recall: the 2014 Buick Enclave has a defective fuel gauge.

While General Motors sales have held steady over the past two months, and even grown a bit, the automaker still isn’t free of the recall bug that hit the company hard during the first quarter, costing it an estimated $1.3 billion and impacting about 7 million vehicles overall.

GM is recalling 51,640 Buick Enclave, Chevrolet Traverse and GMC Acadia SUVs from the 2014 model year because faulty software may cause the fuel gauge to read inaccurately, U.S. regulators disclosed over the weekend.

“An inaccurate fuel gauge may result in the vehicle unexpectedly running out of fuel and stalling, increasing the risk of a crash,” NHTSA said on its website, after GM notified the agency that fuel gauge readings  could be off by as much as one-quarter of a tank. 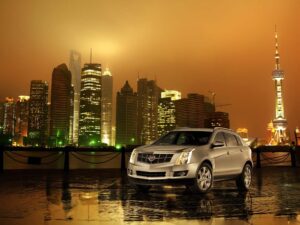 The Cadillac SRX has also been recalled.

To fix the problem, GM dealers will reprogram the vehicles’ engine control modules. As with other safety-related recalls, the work will be done at no charge to consumers.

Last week, GM confirmed it was recalling about 56,400 model year 2013 Cadillac SRX crossover vehicles because of possible delays in acceleration linked to a computer program that controls the transmission, NHTSA said.

“In certain driving situations, there may be a three to four second lag in acceleration due to the transmission control module programming,” according to NHTSA. The report also said the condition can increase the chances of a crash. But it noted GM said it was not aware of any collisions related to this issue.

The affected vehicles are all equipped with 3.6-liter V-6 engines.

(Hammered by recalls, GM barely stays in the black for the first quarter of 2014. Click Here for more.)

Overall, GM has recalled about 7 million vehicles this year, including 2.6 million Chevrolet Cobalt and Saturn Ion sedans, along with a number of other models equipped with faulty ignition switches that are linked to at least 13 deaths.

The ignition switch issue has turned into the biggest crisis GM has faced since emerging from bankruptcy five years ago as the maker has acknowledged it received warnings of the problem as much as a decade ago.

Mary Barra, GM’s new chief executive officer, has ordered a sweeping review of problems with other GM vehicles.   She also has appointed a new internal safety czar to ensure that the company responds quickly to safety-related issues.

(Even as it launches repairs for ignition switch problem, pressure mounts for GM to order owners to park recalled vehicles. Click Here for the latest.)

GM, however, has asked a federal bankruptcy judge in New York to reaffirm that the company is no longer responsible for legal claims arising prior to its 2009 bankruptcy filing. Instead the company has entered into negotiations with a broad group of plaintiffs in hopes of resolving lawsuits before they reach court.

Instead, the maker has expressed interest in setting up a special fund to recompense victims and their families for crashes connected to the ignition switch recall. The plaintiffs’ first meeting with GM’s lawyers and a claims administrator who would oversee any such fund was held in New York at the end of last week.