Federico’s departure not related to investigations. 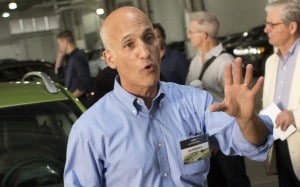 Jim Federico, executive director of global vehicle integration, retired today. He was involved in the investigation of the maker's faulty ignition switches.

One of the General Motors engineers tied to the faulty ignition switch involved in the recall 2.6 million vehicles and the deaths of 13 people retired today.

Jim Federico, 56, was executive director of global vehicle integration since September 2013, according to GM. Before that he was executive chief engineer for global subcompact cars and SUVs, and electric vehicles, and he had worked at GM for almost 36 years.

GM spokesman Jim Cain several media outlets Federico’s retirement was voluntary and was not related to the recall.

“We congratulate him on his retirement and wish him the very best in his future endeavors,” Cain told Reuters.

GM said in an internal email that Federico was taking “on new engineering and design challenges outside of the auto industry.”

Federico, along with John Calabrese, who retired last month, was one of two engineers who played a central role in the faulty ignition switch recall.

According to GM documents, Federico received reports from an engineer in the company’s product investigations department trying to determine cause of air bag failures in some of the automakers vehicles. It was that query led to the defective ignition switch.

Federico directed the team that analyzed ignition switches from GM models at a junkyard and asked Delphi Corp., which produced the switches, for help.

(Fiat Chrysler redefining image as it lays out strategy. For more, Click Here.)

Last October, the team discovered the switch design had been changed several years earlier. Ray DeGiorgio, who was recently suspended by GM, was the lead switch engineer and authorized the change, as well as not changing the part number.

Not changing the part number confused investigators as they attempted to sort out what vehicles had faulty switches and which did not.

It was also a key point in the Congressional hearings that GM CEO Mary Barra sat through in early April. She confirmed during those hearings that it was inappropriate to not change the part number.

Barra, who was praised by Berkshire Hathaway CEO Warren Buffett earlier today for her handling of the ignition switch crisis, has maintained she knew nothing about the investigation until shortly before the recall of the vehicles on Jan. 31. Berkshire Hathaway holds 40 million shares of GM stock.