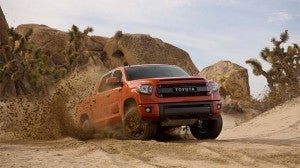 A TRD Pro Tundra goes through its paces.

One of the key motives for Toyota’s decision to move its headquarters and marketing staff from Southern California to Texas undoubtedly involves gearing up for another assault on the lucrative North American truck market, industry experts suggests.

While Toyota has gained ground in SUVs and CUVs, and dominates the small midsize pickup segment, it has failed to gain any real traction in the lucrative full-size pickup segment dominated by its Detroit rivals, despite spending billions on its Tundra line and the plant that produces it.

Art Wheaton, an automotive industry expert and faculty member at Cornell University, said cost savings are only part of Toyota’s motivation for leaving Southern California. Suggesting the Japanese maker “has been woefully falling behind Ford, Hyundai and others in (its) plain or boring designs,” Wheaton said “The move, for Toyota, may help increase the willingness to be bold and take risks as a large turnover in employees is expected.”

Based on what happened when rival Nissan moved its own headquarters from California to Tennessee a few years back, only about half of the 4,000 employees Toyota says it will move are expected to follow their jobs to Texas.

(For the full story on Toyota’s move to Texas, Click Here.)

The anticipated shake-up could prove particularly useful when it comes to kicking Toyota’s truck program into gear considering Texas is traditionally the nation’s leading pickup market.

“The identity of the company in Texas may increase the sales and profile of large trucks and SUVs made in the San Antonio plant,” Wheaton suggested.

Toyota invested more than $2 billion in the San Antonio plant, which opened in 2006, to build full-size pickup trucks. The goal was to challenge General Motors, Ford and Chrysler’s domination of the full-size pickup segment. But Toyota has been little more than an also-ran despite efforts – most recently with the 2014 update of the Tundra.

(Click Here for TheDetroitBureau.com’s review of the 2014 Toyota Tundra.)

The full-size pickup market has generally accounted for less than 15% of U.S. vehicle sales –shrinking sharply during the U.S. economic downturn but reviving rapidly over the last 18 months – but it has long been far and away the most profitable vehicle segment in North America.  And, as demand has been recovering, average transaction prices in the truck segment have risen steadily.

Full-size trucks are big sellers all across the U.S., and have been gaining momentum in Canada and Mexico, as well. But Texas is considered the heart of the U.S. truck market and the roads are filled with GM, Ford and Chrysler trucks.

That was a key reason why Toyota based its Tundra operations in San Antonio. But things got off to a poor start, the factory running significantly over its initial budget. And since opening, it has run well under capacity, largely due to the poor response to the Toyota truck, forcing the maker to try to keep the factory busy by adding production of the smaller Tacoma model.

And even in the midsize segment – which has shrunk significantly over the past two decades – Toyota’s leadership is being challenged. GM is launching two new models, the Chevrolet Colorado and GMC Canyon, for 2015. Volkswagen is aiming to cut into Toyota’s dominance in the Latin American market, and even Hyundai is reportedly eying opportunities in the midsize pickup segment.

The move of its headquarters to Texas is only one sign Toyota is serious about cracking the code of the full-size truck segment. While the headlines might focus on the decision to abandon California, the maker also is shifting a significant number of jobs out of its current operation in Erlanger, Kentucky. Notably, it will move 250 employees to its Toyota Technical Center in Michigan to handle procurement operations. Based near the Detroit suburb of Ann Arbor, the TTC is the center of Toyota’s truck engineering operations.

(Toyota delivers major redesign of Camry for 2015. Click Here to check it out.)

Toyota’s move to Texas comes on the heels of a tumultuous chapter in the company’s history, capped off by the payment in more than $1.2 billion in federal fines last month that were the result of the company misleading federal regulators.  Toyota was slow to disclose and address problems involving so-called unintended acceleration that eventually led to the recall of more than 10 million vehicles.

The results of an extensive internal Toyota study, commissioned in the wake of the recall problems, has led to a wide range of changes at the maker. Among other things, that includes a reorganization of the company’s North American management structure and the promotion of Jim Lentz, a longtime U.S. sales executive, as chief executive for the region, with broad powers over manufacturing, research and development, sales and marketing.

That increased autonomy is underscored by the decision to move Toyota’s U.S. headquarters to Texas.