Automakers adding a little style – and lots of functionality. 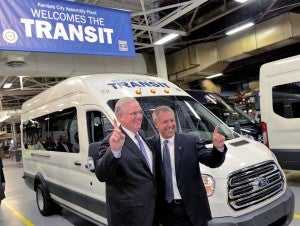 It’s probably no surprise that Ford has put a lot more effort into heralding the launch of the new 2015 Mustang than into its new Transit and Transit Connect models. Vans are the automotive equivalent of Rodney Dangerfield. They get no respect, at least not from consumers.

But it’s a different story when it comes to business owners, and that means auto manufacturers like Ford love these vehicles because they generate consistent sales – and solid profits.

The full-size van “is an extremely important product for us,” said Joe Hinrichs, Ford’s President of the Americas, as he watched the official roll-out of the first of the new full-size Transit models on Wednesday at the maker’s Kansas City Assembly Plant.

The Transit replaces the aging E-Series van which has gone years with virtually no significant updates. For the launch of Transit, however, Ford has pumped about $1.1 billion into the Kansas City plant, where it will add 2,000 new jobs. 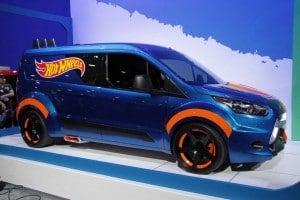 Ford clearly has big aspirations for the Transit, which is basically an Americanized version of the full-size van the maker has been selling for years in Europe. It is offered in a variety of different configurations, including three different roof heights, two wheelbases and three body lengths.

Ford is hoping that will help it boost both its sales and market share in a segment that has been showing some surprising life after years of largely been ignored by manufacturers happy to keep pumping out the same products with little investment or innovation.

The key products the new Transit will face off with are the Mercedes-Benz Sprinter van, the Nissan NV, the Ram ProMaster and General Motors near-twin Chevrolet Express and GMC Savannah models.

But is it worth the investment?

“It’s a relatively stable segment,” suggests Stephanie Brinley, a senior analyst with IHS Automotive. The segment is forecast to generate 280,000 sales this year and climb perhaps 4%, to around 290,000 through the rest of the decade.

(MV-1 van for the disabled is back in production. Click Here for more.)

But the full-size van market was once significantly larger, sales running around 400,000 at the beginning of the New Millennium.

What happened? The economic downturn, of course, took its toll, though the market has largely rebounded. The bigger issue is that buyers now have smaller alternatives, says Brinley, noting that, “Businesses that may not have really a full-size van now have options like the Transit Connect.”

That’s another product entirely, despite the similar name.  Introduced in the U.S. nearly six years ago, the Transit Connect has been a hit with small businesses – caterers, florists, even dog groomers – who need to run errands but don’t necessarily have a lot of equipment or merchandise to carry around.

From 2012, when Ford was largely the only name in the game, the C-, or Compact, van segment is expected to triple in size, according to IHS data, to around 106,000 annually in the U.S.

Do the math and combined sales in the compact and full-size van markets are expected to run roughly the same levels as the larger trucks generated alone 15 years ago.

But that isn’t stopping more players from getting in the game – and some analysts are betting that as the economy rebounds, demand could actually do better than currently being forecast.

Along with the newly updated Transit Connect, compact customers have or will soon have such options as the Nissan NV 200, the Ram ProMaster City, and the Chevrolet City Express.

(Click Here for a closer look at the new Chevy City Express.)

So, maybe these functional options really are getting the respect they deserve, after all.