After long delay, compact crossover finally is coming to US. 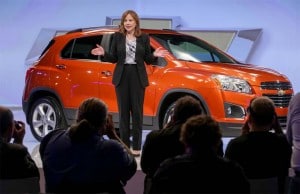 Small SUVs make up one of the world’s fastest-growing product segments, but until recently, General Motors planners didn’t think there was enough market in the U.S. for the Trax which has been on sale in much of the rest of the world for the last several years.

But with a growing number of competitors targeting this niche, the corporate bean-counters finally decided to give the little Chevy crossover a green light, and Trax will land in U.S. showrooms by early next year – if not sooner. 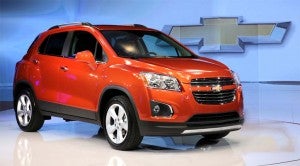 The 2015 Chevy Trax small crossover will find its way into dealer showrooms later this year.

The word, tiny, is likely to cross people’s minds, at least when they consider the crossover’s dimensions. It measures just 168 inches, nose to tail, which means it’s a full five inches shorter than the Chevry Sonic sedan with which it shares GM’s Gamma “architecture,” or platform. The wheelbase, meanwhile, comes in at 100.6 inches.

Yet the Chevrolet Trax is quite a bit more roomy than those numbers might suggest. It has an acceptable amount of rear seat legroom and a full 19 cubic feet of cargo space behind the back row – which jumps to 48 cf when the seats are folded flat. In fact, folding over the front passenger seat yields a full eight-foot space for carrying lengthier cargo, perhaps a ladder or a surfboard.

Though no prices were released, the new model is clearly aimed at young buyers who crave something affordable that doesn’t smack of cheapness. The new Chevrolet Trax is reasonably well-appointed and it can be ordered with some of the high-tech gear Gen-X and Gen-Y buyers crave, including a built in 4G LTE link providing onboard WiFi service. There’s also a Chevy MyLink infotainment system with a large, seven-inch color touchscreen display. 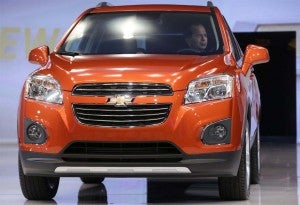 The new Chevy Trax will be powered by a 1.4-liter turbocharged inline four-cylinder engine.

And a backup camera is standard issue.

The new Trax will draw power from a 1.4-liter turbocharged inline-four making 138 horsepower and 148 pound-feet of torque. The engine will be mated to a six-speed automatic, no manual available. But buyers will be able to opt for all-wheel-drive.

(Click Here to check out Mercedes hint of a new GT sports car.)

EPA mileage numbers haven’t been finalized but highway fuel economy is likely to come in slightly below the Sonic’s 31 mpg.

Chevy has had some unexpected strong results since entering the small car market with its Sonic and Spark models, and it’s hoping that with the addition of the Trax it will further expand its reach in a segment traditionally dominated by imports.