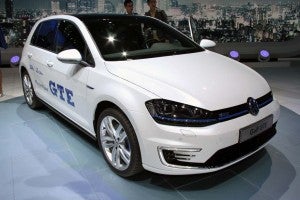 The new VW Golf GTE is the more enviro-friendly sibling of the sporty GTI hot hatch. VW is investing $14 billion in green research and development.

With automakers around the world under increasing pressure to go “green,” by lowering emissions and raising mileage, Volkswagen plans to invest more than ever in eco-friendly products, the maker’s CEO announced during a news conference leading up to the opening of the 2014 Geneva Motor Show.

Promising to build “the world’s largest low-CO2 fleet” of vehicles, Volkswagen AG Chairman Martin Winterkorn said the maker will boost its R&D budget to more than 10 billion Euros, or approximately $14 billion, for the first time. 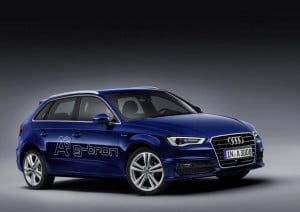 Counting the dozen passenger vehicle brands it operates, VW already has 54 models that produce less than 100 grams per kilometer, or CO2/km, and 324 model variants that come in under 120. That list includes a number of gasoline and diesel models, as well as a growing list of hybrids and plug-ins ranging from the Golf GTE to the Porsche Panamera S E-Hybrid.

And despite widespread skepticism about electric propulsion as sales of battery-based vehicles lag expectations, Winterkorn insisted, “this technology has a future.

(Click Here for more about Honda’s racing car for the road, the Civic Type R.)

But the maker is also pushing to make its factories more environmentally friendly, Winterkorn added, noting that, “Specifically, we aim to reduce energy and water consumption, as well as CO2 emissions, by 25% by 2018.”

Calling the company’s approach to the environment “holistic,” the VW chief said the company is looking for ways to further expand its sustainability program. The maker’s Audi subsidiary has even gotten into the alternative fuels business by partnering in a program that uses wind power and CO2 from the atmosphere to produce a synthetic form of natural gas that can power its new A3 g-Tron model.

A critical goal, Winterkorn said, is to “work faster, more flexibly and more economically than in the past.”