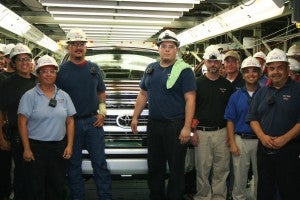 Toyota workers in Japan received raises for the first time since 2008. Could similar increases be coming for its U.S. employees?

For the first time since 2008, Toyota, Japan’s largest automaker, has agreed to increase in base pay for its 50,000 Japanese factory workers. The typical Toyota Motor Workers’ Union member will earn $26 more in base pay per month, Senior Managing Officer Naoki Miyazaki told reporters at a press conference in Tokyo.

The 0.8% pay increase is less than $40 per month raise sought by the union, which had been encouraged by Japanese Prime Minister Shinzo Abe to call for a pay increase. The raise is the largest since 1993, according to Reuters.

However, when the boost in longevity pay and compensation workers receive for learning new skills is calculated, the typical Toyota worker will get a 2.9% pay increase or the equivalent of about $73 per month, Toyota officials noted.

The Abe government has been calling for pay increases to help further stimulate the Japanese economy, which still hasn’t escaped a deflationary spiral that began with the collapse of the Tokyo real estate market more than two decades ago.

Workers at other major Japanese exporters, including carmakers such as Honda, Nissan, Mazda and Mitsubishi, followed Toyota’s example and handed out raises to their workers as well. Nissan agreed to its union’s request for a 3,500-yen, or $34, increase in base wages and bonuses equivalent to 5.6 months of salary, Bloomberg reported. Honda agreed to raise monthly base wages by 2,200 yen, which is about $21.50.

(Back from the abyss: Chrysler 200 plant defies death sentence. For more, Click Here.)

Toyota also will come under pressure to boost the base pay of the company’s workers in the United States, which is the company’s major production hub outside of Japan. A raise at Toyota in the U.S. also could force other automakers, such as Kia, Hyundai, Mercedes-Benz and BMW, to raise the wages of workers at non-union plants in the southern United States.

(Click Here to get details on a study showing backup cameras save lives.)

The base pay of senior workers covered by contracts negotiated by the United Auto Workers at General Motors, Ford and the Chrysler Group in the U.S. also has been frozen since 2007.

Overall, Toyota has kept a tight grip on employee compensation since 2008 when the global economy was crippled by the fallout from the collapse of Lehman Brothers.

While a weaker yen has helped Toyota forecast a record profit for the year ending March 31, the raise comes as Japanese companies brace for a sales-tax increase next month. The tax increase is the first in 17 years.