Maker may still turn to Motor City for later models. 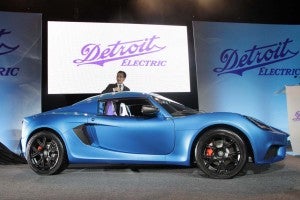 CEO Albert Lam with a prototype of the Detroit Electric SP:01 battery sports car. The car will now be built in Holland instead of Detroit.

Call it Not-So-Detroit Electric, apparently. Already a year late in plans to produce a $135,000 limited-edition sports car, the start-up firm says it will turn to Holland to produce its little SP:01 model starting later this year.

But the company still hopes to return to the Motor City when it launches a more mainstream, battery-powered sedan later in the decade.

Named after a Michigan-based battery-car company that folded during the Great Depression, Detroit Electric was introduced by Hong Kong businessman Albert Lam, a former Apple executive, during a splashy news conference nearly a year ago. At the time, he admitted the project walked a fine line “between sanity and insanity,” and would be a challenge to get into production.

Nonetheless, the goal was to have a factory in place by the end of 2013, most likely in the Detroit suburbs. The original goal was to produce just 999 of the SP:01 battery sports cars which would share the same two-seat platform as the Lotus Elise.

That model was to be followed by a more mainstream electric sedan. To handle both models, Detroit Electric planned to set up a final assembly operation capable of handling about 2,500 vehicles annually. It was to employ just 100 workers.

(GM pulls Opel out of China. For more, Click Here.)

But the vast majority of the assembly process actually would be handled by Detroit Electric’s partners, helping it sharply reduce its own investment. A traditional manufacturing facility, explained Don Graunstadt, head of North American operations, would cost about $800 million, and “There would not be enough in sales to support that kind of investment.”

But it also appears that the economics didn’t work out for building the SP:01 in the U.S. “Supply chain logistics have dictated that the assembly operations for the limited production run of that vehicle have currently to be located just in Europe,” a PR firm representing the start-up maker told the Detroit News.

The ongoing delay and shift in production has renewed questions about Detroit Electric’s ultimate viability. The firm’s founders have insisted they will not take government assistance.  They’ve also insisted they want to be American-based and owned and will not look to sell to one of the many Chinese automakers looking to expand globally. Several, including Wanxiang Motors, have recently snatched up faltering electric vehicle firms, such as Fisker Automotive, in a bid to gain a global presence.

While Detroit Electric may no longer be planning to build the SP:01 in the Motor City it says it still is a presence in the community. It is headquartered in the Fisher Building that was built by automotive pioneers the Fisher Brothers. They developed the first successful fully steel-bodied car design, eventually selling out to General Motors.