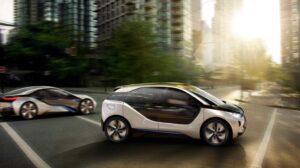 BMW is counting on the i3 and i8 to help the maker meet the EU emission standards in 2020.

Looming tougher emissions standards in Europe has automakers on the continent hustling to find ways to make sure they meet the 2020 mandate. BMW plans to build more than 100,000 electric vehicles annually to achieve the goal.

BMW CEO Norbert Reithofer told reporters yesterday that the German maker will increase production levels of its i3 and i8 in 2018 in anticipation of getting to 100,000 units annually in order to meet the stricter carbon dioxide emission standards, according to Automotive News.

BMW wants to cut its average emissions to 105 grams per km by 2020. That would be down from 133g/km last year. The European Union set an industry-wide goal of 95g/km by 2021, down from about 130g/km now. However, the targets are individual to each company depending upon the type of vehicles each produces.

BMW’s push to get it done by 2020 reflects the original date for the new standards; however, after intense lobbying efforts by automakers in Europe, the EU pushed back the implementation date by one year.

EU economic modelling shows that the tougher emissions standards would mean a total cut in a carbon dioxide emissions from cars and vans of around 422 million tons by 2030.

(The 10 millionth American-made Honda rolls off the line. For more, Click Here.)

BMW said its i3 electric car is off to a good sales start. The i3 went on sale in Germany last fall and racked up more than 10,000 orders. The sporty i8 will come online this June and officials predict waits as long as six months to get the plug-in hybrid coupe.

The company will need to add to its rumored $2 billion investment to reach the lofty production number, according to Reithofer. By comparison, Renault-Nissan invested 4 billion euros in its electric car program, which includes the Nissan Leaf and the Renault Zoe models, Automotive News reported.