Back From the Abyss: Chrysler 200 Plant Defies Death 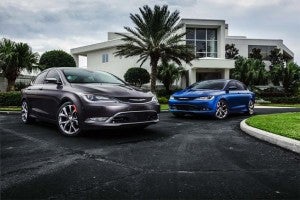 Fiat Chrysler is ready to begin production of the new 2015 Chrysler 200 at the Sterling Heights, Mich. plant it once planned to close.

Fiat Chrysler Automobiles will officially mark the start of production of the 2015 Chrysler 200 with a ceremony Friday at the company’s suburban Detroit Sterling Heights Assembly Plant. It’s the same factory the Detroit maker planned to close after emerging from bankruptcy in 2009 and now, along with the new 200 sedan, has become a critical part of Chrysler’s turnaround.

The maker – now part of the newly merged Fiat Chrysler Automobiles – is betting on the 200 to help it gain a foothold in the huge but highly competitive midsize segment where it will go up against tough competitors like the Ford Fusion and Chevrolet Malibu, as well as such imports as the Nissan Altima, Honda Accord and Toyota’s traditionally best-selling Camry.

An earlier version of the 200, launched with the help of a widely seen 2011 Super Bowl commercial featuring rapper Eminem, helped gain some traction for the midsize model – and saved the Sterling Heights plant. Chrysler’s bankruptcy plan called for permanently shutting it, any cash from the sale of the property going to the maker’s creditors. 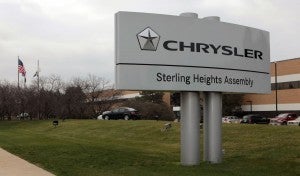 After Chrysler featured the 200 in its 2011 Super Bowl ad featuring Detroit native Eminem, sales took off and kept the Sterling Heights, Mich. plant where it is produced off the chopping block.

“It was one of two plants that were supposed to close that were saved,” said Bill Parker, the former president of United Auto Workers Union Local 1700 who led a campaign to save the plant from a permanent shutdown.

The other factory saved was in Detroit and, “The Conner plant stayed open because nobody wanted to buy it,” Parker added. It now builds the SRT Viper sports car.

Chrysler CEO Sergio Marchionne, who is expected at Friday’s ceremony, wound up buying the Sterling Heights plant back from the “old” Chrysler in 2010 for about $20 million and promised to renovate the building and two other nearby plants. The total cost of the renovation of the Sterling Heights assembly plant and stamping plants in Sterling Heights and Warren has now come to $850 million.

The maker also recently added another 1,000 workers to prepare for the anticipated demand for the new 2015 Chrysler 200.

A big part of the investment, approximately $350 million, was spent on an all-new paint shop and a new body shop. The improvements in the assembly process will allow for more precision and greater quality in building the 200 and other models to come out of the plant, Chrysler officials said. The renovation also reduced the energy required to build the 2015 Chrysler 200, the first car to roll off the plant’s re-tooled assembly plant, by 62% compared with the outgoing model.

The Sterling Heights plant has a colorful, if somewhat checkered history. It was once used by the U.S. Department of Defense to build missiles and then sold to Volkswagen AG in the late 1970s. VW planned to build what would have been a second U.S assembly plant. But it abandoned the idea after the 1981-82 recessions and soon after closed its first U.S. assembly plant located in Westmoreland, Pennsylvania. 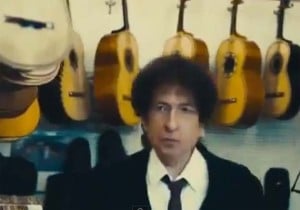 Bob Dylan in the ad for the Chrysler 200.

Chrysler picked up the Sterling Heights plant from Volkswagen of America in the early 1980s as part of Lee Iacocca’s effort to rebuild and retool the company after its first federal bailout.  But by 2009, the factory was outdated and unneeded.

Former UAW Local Pres. Parker, who still works on the assembly line after voluntarily stepping aside as 1700 president after seven terms, said he basically used a two-prong campaign to keep the plant open.  The local mounted a publicity campaign that included lining up support in Congress and in the state legislature and among local businesses.

“I went up and down Van Dyke (Ave.) asking for support,” Parker said, referring to one of the main thoroughfares in the Detroit suburbs. “But I also knew we had to make a business case,” he added. “Ford had pulled out of the mid-sized segment and it was dominated by the (Honda Accord) and (Toyota) Camry.  We were the only plant (inside Chrysler) that could build that kind of car.”

Ultimately, Marchionne, who was eager to rebuild Chrysler’s product line, agreed. The 2011 Super Bowl commercial with rapper Eminem and the now famous, “Imported from Detroit” tagline helped show Chrysler could compete, even with what was considered one of the market’s weaker midsize offerings.

Chrysler is expected to build a number of different models in the now-renovated plant, including a midsize Dodge and at least one, and possibly two, utility vehicles sharing the same basic platform used for the Chrysler 200.

(For more GM’s efforts to assuage owners of the cars involved in the ignition switch recall, Click Here.)

The new 200 will feature a pair of engines expected to deliver some of the best mileage in the segment, thanks to a midsize market-first nine-speed automatic transmission.

The new version of the sedan got another Super Bowl send-off with this year’s extended-length spot, but this time Chrysler traded in Eminem for a new spokesman, the legendary folk singer Bob Dylan.

“We had the right ad but the wrong car,” Marchionne joked about the first Super Bowl campaign. “Now we have the right car,” he declared after the 2015 Chrysler debuted at the NAIAS.