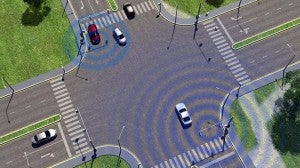 A V2V system could signal you when another car has run a red light.

Federal regulators want your car to be able to talk to others on the road in a bid to reduce motor vehicle crashes and to help motorists avoid traffic jams.

After years of study, the National Highway Traffic Safety Administration today said it will begin taking steps that could eventually require all new cars and trucks to be equipped with so-called vehicle-to-vehicle, or V2V, technology, calling it a “key” to saving lives while also improving traffic flow in major urban areas.

“Vehicle-to-vehicle technology represents the next generation of auto safety improvements, building on the life-saving achievements we’ve already seen with safety belts and air bags,” said U.S. Transportation Secretary Anthony Foxx. “By helping drivers avoid crashes, this technology will play a key role in improving the way people get where they need to go while ensuring that the U.S. remains the leader in the global automotive industry.”

The technology also could be linked to local roadway systems to get even more detailed information about road and weather conditions.  Meanwhile, a vehicle equipped with the technology could also get alerts to where the driver might find an open parking spot in a crowded downtown.

At its most advanced, V2V technology could become critical to the development of the autonomous vehicles that many automotive manufacturers hope to put into production by the beginning of the next decade.

(Nearly 9 of 10 Americans say they’d be worried about being in a driverless car. Click Herefor the full report.)

NHTSA officials said their research indicates a “large majority” of crashes involving two or more vehicles could be prevented through the use of vehicle-to-vehicle systems.  The technology could be used to provide warnings – or even automatically take evasive action “in common crash types such as rear-end, lane change and intersection crashes,” a statement from the safety agency suggested.

The feds plan to release a more complete report on the research program later this month and will announce proposed rules before the end of the Obama Administration.

A number of research programs exploring the potential – and potential problems of V2V technology are now underway across the country, including an extensive public-private project based in Ann Arbor, Michigan, dubbed the Safety Pilot “model deployment,” which involved nearly 3,000 vehicles.  Initial feedback has been extremely favorable, participant Jeff Cowall telling TheDetroitBureau.com he would be “very” pleased to have the technology available on a much wider scale.

(Millennials are the group most open to autonomous technology, according to another survey. Click Here for more.)

There are still a number of questions to be answered, including the scope of the technology, the means to ensure different vehicles’ communications gear can talk to one another and, of course, cost.  But proponents contend that many of the basics are already available on modern vehicles equipped with electronic engine and brake controllers.  The key will be coming up with the right communications systems and then figuring out the best way to alert drivers to dangers ahead – or to trigger automatic action by the vehicle itself.

A growing number of cars and trucks are already fitted with forward collision warning systems, lane departure systems and other technologies that can alert a driver to a potential collision. Some vehicles even can apply brakes automatically if the driver doesn’t respond quickly enough.

Over the past two decades, motor vehicle fatalities have plummeted as more safety technologies are incorporated into new cars and trucks.  But crashes are still the leading cause of death for children and young adults, noted Scott F. Belcher, President and CEO of the Intelligent Transportation Society of America, and resulted in about 33,000 deaths and 2.3 million injuries in 2013.

“While the auto industry has made great strides to reduce fatalities and injuries after a crash,” he said, in response to the NHTSA announcement, “the next giant leap is to enable real-time communication between vehicles and with the world around them so crashes can be avoided in the first place.”

How consumers react to the V2V proposal remains to be seen. A new Harris Poll cautions that nearly nine out of 10 American adults would today be “worried” about driving in a fully autonomous vehicle.  And more than a third of those surveyed said they’re also worried about privacy issues, such as government, business or insurance companies tracking where and how they drive.

On the other hand, other recent studies have shown widespread interest in technologies, such as forward collision warning, that could reduce highway crashes.

(Click Here to check out some of the coolest new technologies to debut at the 2014 Detroit Auto Show.)