“Baby” is most common moniker for vehicles, survey says. 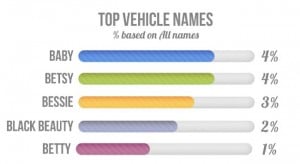 A recent survey found that "Baby" is the most common name for a car in the U.S. It also found that women are more likely than men to name their vehicles.

Automakers devote substantial resources to the development of cars and trucks, including the process for naming them. As it turns out, it doesn’t matter to a significant number of Americans: they are going to rename them anyway, according to a new survey.

Women and younger car owners are the most likely to give a nickname and associate a gender to their vehicles’, according to a new report from DMEautomotive.

In fact, the younger the car owner, the more likely they are to give their vehicle a nickname. Forty percent of car owners 18-24 years old give their cars a name and that drops to 30% for the 25-34 year-old age group.

“While these findings, on the surface, are just plain fun…they also offer an interesting, even counter-intuitive perspective on the relationships car owners, especially women and the young generation, develop with their vehicles,” said Doug Van Sach, DMEautomotive’s vice president, Strategy and Analytics.

Perhaps even more surprising is that women are more likely than men to name their vehicles: 23% to 18%.

“The accepted cliché is that men have a more passionate, personal relationship with their beloved cars, while women view them as utilitarian machines that get you from Point A to B,” Van Sach said.

(Makers muscling up at this year’s Detroit Auto Show. For more, Click Here.)

“But this research provides a different insight: women are significantly more likely to christen their vehicles, and also associate a female gender with them, while more men perceive their vehicles as male.”

Some of the other findings include:

The big question that remains: What are people naming their cars? The most common names are Baby and Betsy, which account for 4% of all the names. Bessie was next at 3% with Black Beauty (2%) and Betty (1%) rounding out the top five.

In fact, while one out of every five cars on the road gets a name, one of every four gets a name that begins with the letter “B,” according to the survey.