German maker adding midsize SUV to US line-up in 2016 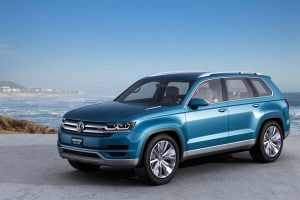 Volkswagen plans to begin selling a midsize SUV, based off the CrossBlue, in the U.S. in 2016.

Despite enduring a tough year for its U.S. sales, Volkswagen officials are sticking to their stated goal of selling 1 million vehicles in the U.S. between VW and Audi by 2018.

“We are moving on,” said Dr. Martin Winterkorn, Volkswagen AG CEO, during an event tonight in Detroit for the North American International Auto Show.

They are “moving on” by adding a midsized SUV to the line-up in 2016 that will help the German maker meet that goal. The new SUV is based off the CrossBlue concept that made its debut at last year’s North American International Auto Show.

VW’s plants in Chattanooga, Tenn. and Puebla, Mexico, are the leading contenders to build the new SUV. The UAW and Volkswagen have been in discussions about the union’s potential representation of the hourly workers at the Chattanooga plant, but have struggled to settle the matter.

Winterkorn declined to say where the new SUV will be built, only that it would be in North America. He also brushed aside any impact that the UAW may have on the selection process, saying it will be “based on economics.”

Michael Horn, CEO of Volkswagen of America, said the decision would be “made in the next two weeks.”

Volkswagen suffered through 2013 seeing sales drop 6.9%, although it did sell more than 400,000 units for a second consecutive years: a feat it had not accomplished in more than three decades. Conversely, Audi sales were up 13.5% to 158,061 units.

In order to meet the goal of 800,000 VW products and 200,000 Audis, the portfolio may have to be expanded further. Horn said that VW’s product shortcomings were apparent when comparing the line-up with what products are selling in the U.S. right now.

He noted the company did not have a compact SUV, but declined to elaborate further. He did say VW would not be producing a full-size pickup truck, which is another segment selling well.

The newly appointed Horn said he didn’t believe that VW had an image problem in the U.S. that was preventing it from selling more vehicles. He also added that he had no plans to meet with UAW officials regarding the possibility of representing employees there.

“The foundation of America is democracy,” he said, adding that he would deal with whatever structure was in place in terms of representing the hourly employees.