Hailed as best by jury of global designers. 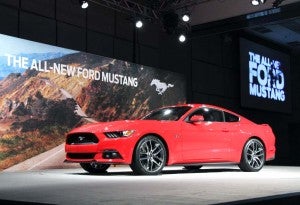 The 2015 Ford Mustang at its global debut.

They were among scores of new products unveiled during the annual Detroit event’s media preview that faced scrutiny by 30 current and retired chief automotive designers from around the world.

While fuel economy, performance and digital safety and infotainment systems have become increasingly important to buyers, studies routinely show that design remains one of the most critical factors, especially when shoppers are first figuring out which models to put on their shopping list.  And, if anything, that has triggered what many observers are calling a new golden era of automotive styling. 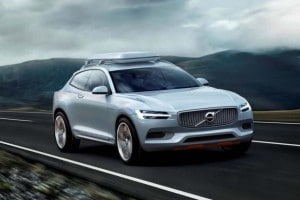 Indeed, the North American International Auto Show, or NAIAS, saw makers markedly up their game.  Toyota, which has often been derided for its bland, almost appliance-like approach to design, brought its new FT-1 sports car concept to Detroit, explaining that the name is short for “Future Toyota,” the maker’s U.S. design chief Kevin Hunter suggesting it is “emblematic” of the more “passionate” approach the Japanese giant will be taking.

The aggressive, “functional sculpting” of the FT-1 landed it among the finalists for the Concept Car design award, along with the edgy Kia GT-4 Stinger, a 2+2 sports car from Kia. But jurors gave their nod to the Volvo Concept XC Coupe, the visual antithesis to the classic, boxy wagons that the Swedish automaker had long been known for.

It represents, “a great step forward for Volvo, but there is still the recognizable heritage” of the Swedish brand,” said Ralph Gilles, the chief judge for the Eyes on Design Awards, and the head of design for Chrysler. Other jurors described it as a “quiet, elegant statement,” and a vehicle that gives a hint at where automotive design is heading in general.

(For a first look at the new Volvo Concept XC Coupe, Click Here.)

The Volvo Concept was popular enough to take a second award for “Innovative Use of Color, Graphics and Materials,” which honors vehicles that “advance the craft” of design.

The Detroit Auto Show brought out a number of “fantasy in chrome” concepts, in the words of another chief judge, retired Ford chief designer Jack Telnack. But in recent years, a growing number of these vehicles have been little more than thinly disguised production models.  The Acura TLX Prototype unveiled on Tuesday, for example, will be back later this year as the maker’s newest midsize luxury sedan. 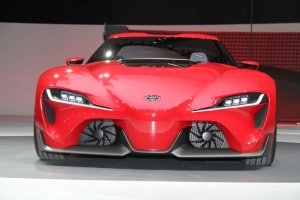 Coming at you? Toyota says the FT-1 concept reveals the more "passionate" approach it will be taking.

The Volvo Concept falls into a middle ground.  There are some elements of the car that are pure fantasy, but the show car is expected to heavily influence the next-generation coupe version of the Volvo XC90 crossover vehicle due out in less than a year.

It should reach market not long after Ford rolls out an all-new version of its Mustang. The 50th anniversary edition of the long-popular “pony car” had an unusual “pre-launch” last month in a number of cities around the world.  But the general public will get a first opportunity to check the new Mustang out when the turnstiles at Detroit’s Cobo Center open over the weekend.

The 2015 Ford Mustang has generated tremendous buzz – and its share of controversy.  Designer and judge Chuck Pelly, head of the Designworks USA consultancy, said taking on the redesign of such an icon “is one of the most difficult challenges” a stylist can face. But the jury agreed that the Ford team pulled it off.  Judge Gilles declared the results ‘beautiful…muscular…modern,” and a good balance of “heritage” and future-looking design.

For his part, Mustang chief designer Joel Piatkowski downplayed the challenges he faced, saying that, “diamonds aren’t made without pressure.”

The three Eyes on Design awards were presented as part of a series of programs developed to help fund the Detroit Institute of Opthalmology.

(Click Here for the complete round-up of TheDetroitBureau.com’s coverage of the 2014 North American International Auto Show.)