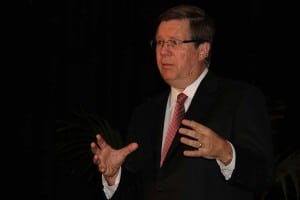 Toyota expects to sell 100,000 more vehicles this year than it did in 2013 even as total carsales in the U.S. begin to level off. This increase could represent half a percent of market share if the industry meets analysts’ sales forecasts of 16.5 million units.

“At Toyota, we’re confident the auto industry will continue to grow in 2014, but at a more moderate pace,” Jim Lentz, chief executive officer, said in a speech to the Society of Automotive Analysts on the eve of then annual North American International Auto Show.

“At the same time, we believe Toyota is positioned to have another solid year,” added Lentz, who cited the company positive momentum.

“For 2013, combined Toyota, Lexus and Scion sales topped 2.23 million vehicles – our best sales year since 2007 – for a 7.4% increase,” he said. “This year, we’ll offer eight new or updated products to complement full-year sales of three core models, including Corolla, RAV4 and Tundra.”

Lentz noted automakers have enjoyed four consecutive year-over-year sales increases propelled largely by pent-up demand for new vehicles as the economy struggled to recover from the recession. However, Lentz believes the growth now is purely a result of “economic gains rather than pent-up demand.”

By several measures, the economy is showing signs of a more robust rebound, he added.

“First, GDP climbed steadily throughout 2013 and some economists predict economic growth will reach 3% this year, a full point increase over the past four years,” Lentz said.

“Second, the unemployment rate is dropping and is expected to continue declining as our economy gains steam. At 3% GDP growth, employers could add 250,000 new jobs each month this year compared to about 190,000 jobs each month in 2013.”

(Ten debuts to watch at the Detroit Auto Show. For more, Click Here.)

As a result, the unemployment rate could hit about 6.5% and recover most of the jobs lost during the recession, he added.

(Click Here to get the details on the Lexus RC-F.)

This indicates a big boost in GDP, and by extension more jobs and more new homes paint a rosy picture for consumers in 2014 and should lead to increased household wealth, which would unlock more consumer spending.