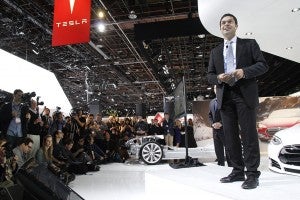 Tesla is the little electric engine than could. No matter what obstacle is placed in front of the company, it continues to plug along and it appears its determination will be rewarded with fourth quarter revenues expecting to exceed guidance by 20%.

In a letter to shareholders discussing the company’s third quarter results, Tesla indicated it expected fourth-quarter earnings to be “about consistent” with the third quarter.

Of course even that’s tough to determine as the maker reported earnings of $16 million, but if generally accepted accounting principles (GAAP) are applied, it lost $38 million.

Regardless, the fourth-quarter prediction was a surprise to analysts who had been anticipating an increase as production and sales of the Model S battery-car continue to grow.

The analysts were correct as the EV maker’s sales during the quarter were the highest in company history. It delivered nearly 6,900 Model S sedans, which was 20% higher than predicted.

The sales increase comes during a time where the Palo Alto, Calif.-based company is dealing with an investigation by the National Highway Traffic Safety Administration (NHTSA) into three Model S vehicle that occurred when the compartment housing the battery was compromised.

(Click Here to see that sales of plug-in vehicles doubled in 2013.)

Guillen took advantage of the world stage provided by the North American International Auto Show to remind people that the Model S holds a five-star safety rating from NHTSA and no one has ever been killed or suffered a serious injury while driving or riding as a passenger in a Model S.

He went on to note the company has already made safety improvements to the Model S through a firmware update sent to each vehicle.