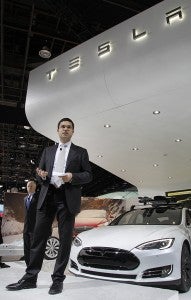 Tesla’s safety issues regarding the Model S have put the EV maker on a bit of a roller coaster ride for the past six months, and it appears they won’t be getting off the ride any time soon.

While the company had plenty of good news to discuss, such as deliveries in the fourth quarter were up 20% over guidance, the supercharger network expansion in the U.S. is progressing well and the Model S is the top-selling car in Norway right now.

However, when the press conference turned to the issue of safety and the status of the NHTSA investigation into the three Model S fires and the potential impact on the company, things got a little…strained.

Jerome Guillen, vice president, Worldwide Sales & Service, noted the car’s five-star safety rating from the National Highway Traffic Safety Administration (NHTSA), and added there had been no fatalities or serious injuries to anyone in a Model S, but that the company is constantly working to improve it.

“We don’t stand still, although we think the car is already extremely safe,” he said.

He noted the company had already sent a firmware update aimed at improving the car’s performance, but it was clear there was more to the story.

“While NHTSA may sometimes call this a recall, we call this modern technology,” he said, adding that it’s silly to call it a recall because the vehicles are not physically going anywhere to be worked on and suggesting the company would consider finding a word to replace “recall.”

While he was asked other questions unrelated to the Model S and a potential recall, when asked further about it he became even more agitated, even sounding a bit exasperated.

“I think it’s apparent to everyone that we continue to take steps to make the car better…over and over and over. We sent firmware to make it perform better,” he said, frustrated. “If NHTSA wants to call it a recall, so be it. That’s not going to stop us from doing the right thing, which is to make sure the cars become better and better. That’s our approach. That’s our North Star. That’s what we’re going to keep doing.”

(Click Here for the 10 debuts to watch in Detroit.)

Word must have leaked back to Elon Musk, Tesla’s founder and CEO who did not attend the event, who tweeted that there is no “physical” recall of any Tesla models by Tesla…and that the word “recall” should be recalled.