Subaru Goes Back to the Future with WRX 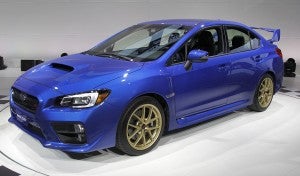 WRX loyalists got a real treat for 2014 as the STI has a limited-edition version in WR Blue with gold wheels: just like the original. Photo credit: Len Katz.

Subaru played possum with the introduction of the new WRX STI at the North American International Auto Show. Amid the requisite fanfare of flashing lights, blaring music replete with a thumping base line, the silver STI emerged from the smoke and onto the turntable for all to see.

Subaru of America President Tom Doll strode out to talk about the newest iteration of the STI, including the 305 horsepower, standard all-wheel drive and its long racing legacy. However, the longer he spoke, the more it became clear this would be a two-car extravaganza.

Loyal WRX owners are almost always partial to the WR Blue version of the maker’s iconic pocket rocket. Today they got a special treat as today as a second STI clad in WR Blue and gold wheels and a six-speed manual transmission hit the stage: just like the original 10 years ago. The maker said it will produce just 1,000 of the special edition models in 2014. 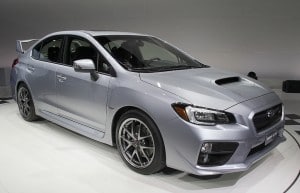 Again, producing 305 hp and 290 ft.-lb. of torque, the new version is quite an evolution from the original that produced 250 hp, Doll noted. All STIs – including the special edition – are available only as four-door sedans. Doll confirmed there would be no coupes coming. It will hit showrooms in late April.

(Click Here to see the top 10 debuts at this year’s Detroit Auto Show.)

While the STI acts as a halo helping to drive sales of all Subaru models, expect 2014 to be a slower year for the auto maker.

(GM sweeps car and truck of the year awards. For more, Click Here.)

Doll said that after back-to-back years of stunning sales growth – 26% each year – he expected Subaru to post 8% to 10% improvement to between 450,00 and 460,000 units this year. He said it wasn’t necessarily a reflection of the overall market – although plenty of executives at this year’s show are forecasting smaller sales jump in 2014 – but the fact the maker was capacity constrained.