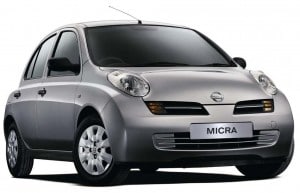 Nissan's new Micra will launch in Canada for 2015.

Nissan is bringing its Micra minicar to the North America — but not to the United States, at least for now.

Nissan has announced that it plans to sell the new, 2015 Micra in Canada, a move that reflects the fact that Canadian motorists tend to be more interested in small cars than their American counterparts.

“Micra will change the automotive landscape and provide Canadians with the value and fun they deserve in an entry-level car,” said Christian Meunier, President, Nissan Canada Inc. “With great visibility, impressive agility and excellent turning radius, Micra is designed for Canadian drivers.  It will offer a small and fuel efficient, yet spacious and fun choice – at a great price.”

While Ford is the number one brand in Canada on the strength of the strong sales of the F-150, and Chrysler is number two thanks to strong sales of the Ram 1500, Nissan sales increased by more than 11% last year, according to figures compiled by the web site GoodCarBadCar.

Nissan, however, still trailed not only Ford and Chrysler but also General Motors, Toyota, Honda, and Hyundai in overall sales.

(Nissan wants to crowdsource the design of its next Titan pickup. Click Here for more.)

The Micra will not be sold in the U.S., at least not for now.  It’s not the first time Nissan has brought cars to Canada that it did not market South of the Border.  It took the same strategy, nearly a decade back, with the XTrail, a small sport-utility vehicle.  And Nissan isn’t alone.  A number of makers have targeted Canadians with models not available in the States over the years, while other products were launched in the Great White North only to be introduced in the U.S. later.  That was the strategy Daimler AG followed with its Smart brand.

Though the two countries have tremendous similarities there are also some significant differences, especially when it comes to fuel prices and taxes, both of which are much higher in Canada. As a result, Canadian motorists, on the whole, tend to drive vehicles a size-class smaller than American counterparts, according to industry data.

(Forget green. Muscle cars are the big story at the 2014 Detroit Auto Show. Click Here for the full story.)

The Micra gives Nissan an alternative that appeals to urban Canadians, said Meunier, who unveiled the new Micra at the opening of the Montreal Auto Show.  He said the Micra will be a “truly Canadian” car with features such as heated outside mirrors, rear heater ducts to keep back seats warm, 60/40 split rear seats and either 15 or 16 inch wheels – sizes that are widely available as snow tires.

“Micra will truly be a car for every Canadian,” said Meunier. “It’s been specifically designed for this market and has been thoroughly tested right here in Montreal in driving conditions Canadians typically face. It’s ready for Canada. And we think Canada is ready for Micra.”

For the time being, at least, Nissan’s smallest U.S. model is the Versa, the new hatchback Versa Note model getting a major redesign for the 2014 model-year.

(What a concept! Show cars pack them in at the 2014 Detroit Auto Show. Click Here for a look.)

Subcompact sales surged in the U.S. over the last few years as fuel prices soared to record levels. But demand has leveled off as gas prices have slipped back.  Industry analysts continue to debate where the segment will go in the years to come – and whether there will be a substantial market for even smaller so-called B-segment models, such as the Smart fortwo, the Fiat 500, the Mini hatchback – or possibly the Nissan Micra.