GM turns to Nissan for a helping hand. 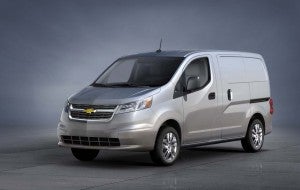 The 2015 Chevrolet City Express will be available in dealerships in the U.S. and Canada this coming autumn.

One of the big reveals at the Chicago Auto Show next week will be the rollout of a new compact cargo van from General Motors – for which GM has turned to Nissan for a helping hand.

The new Chevrolet City Express van, which is designed to compete with the new Ford Transit Connect, is aimed primarily at commercial customers, such as tradesman and small business owners in need of a delivery vehicle, GM officials explain.

The new Chevy van could be converted into a people carrier, as well, and is expected to find a strong niche in the small van segment, which has been growing in recent years.

GM pulled out of the minivan market before its 2009 bankruptcy and had been relying on an old and outdated offering for the commercial van segment. But rather than start development of a new model from scratch, the Detroit maker announced last year that it had it contracted with Nissan to build a small cargo vehicle that Chevrolet would sell in the United States and Canada.

GM officials explain that the move helped them improve their speed to market.  But it also saved the Detroit maker significant up-front costs – even though it will likely pay a premium to source the van from its competitor, Nissan.

based on the Nissan NV200, the 2015 Chevrolet City Express will be available for sale this coming autumn as production at the Nissan plant in Cuernavaca, Mexico begins to accelerate.

Nissan currently sells various versions of the NV200 globally, including the United States and Canada. Among the versions Nissan has developed is the so-called “Taxi of Tomorrow” which New York City hopes to use to replace its existing fleet of licensed cabs.

The NV200 was a previous winner of the International Van of the Year Award. Cost of ownership for the vehicle is claimed to be among the lowest in the class, which GM hopes will help boost demand.

The compact cargo van segment has grown substantially in recent years – but so have the number of competing offerings.  Ford recently updated its Transit Connect model in a bid to gain more traction with U.S. consumers.

(Click Here to check out the new Ford Transit Connect.)

Chrysler will turn to its Italian partner Fiat for a new van of its own, the ProMaster City, likely to debut sometime during the 2015 model-year.