Former GM exec professes love for EVs, but says industry’s got it wrong. 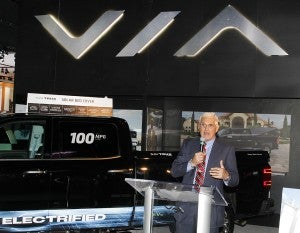 Via Motors, a start-up company planning to offer plug-in electric vehicles to commercial customers, said it has received an $80 million contract as part of a transcontinental electrification project. 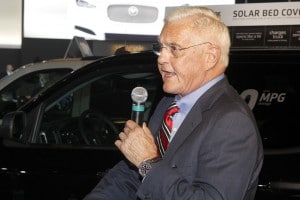 However, they do work when vehicles travel relatively short distances and can be recharged at regular intervals. In fact, electric vehicles make more sense than natural gas, which also has been touted a future fuel form commercial fuel.

“The best use for natural gas is to make electricity,” Lutz said. On the other hand, electrified commercial vehicles make sense because they can deliver a substantial savings on fuel costs, and provide an economic payback to owners and operators.

While natural gas burns cleanly, it still requires special tanks. “You also need a lot of it because the energy density is low so you wind up with a range of only about 100 miles,” said Lutz after the press conference at which Via executives outline near term plans. Lutz is member of the Via board of directors.

Privately held Via plans to integrate its proprietary powertrain into new vehicles, and sell directly to fleets under the VTRUX brand name. Via VTRUX deliver up to 40-mile battery range and unlimited extended range, averaging more than 100 mpg in typical daily driving. It has partner who plans to install the electric power train in vehicles purchased from General Motors. The bankruptcy of what was formerly A123, however, forced VIA to find an alternative battery supplier.

The hotel owner, Glenn Weir, said he is very cost conscious and the electric vans from VIA will save him money.

“Best Western is excited to deploy this ultra clean, economical technology. We look forward to providing our guests with clean electric shuttle services and free charging for their own electric vehicles.”

The hotel shuttle is only the first step in a broader vehicle electrification project now underway in Canada.

Called Sun Country Highway, the privately funded electrification project, was launched by founder Kent Rathwell, and has placed over 1,000 charging stations across Canada to allow electric vehicle owners to travel coast-to-coast with free charging. In addition, it will provide charging for the business’ own electric shuttle vans and trucks in the next phase.

“In phase one of the project we electrified hundreds of businesses across the country including placing about 100 chargers at Best Western Hotels,” said Rathwell. “In phase two, we will deploy Via’s electric trucks and vans and have already placed an $8 million order with a deposit Via for the first 100 vehicles. We have signed a purchase agreement with Via committing us to about $80 million of electrified vehicles overall, to meet the demand of the expanding project.”