Is This VW’s New Dune Buggy? 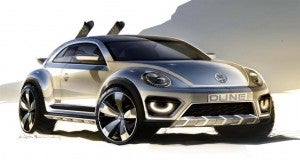 VW appears quite serious about putting the Beetle Dune concept into production.

You’re going to need a scorecard to keep up with all the offerings Volkswagen plans to unveil in Detroit next week, including its sporty Golf R, Passat BlueMotion Concept, a likely production version of the CrossBlue crossover – and, as this image suggests, a possible new version of the Beetle.

If this rendering strikes a retro chord, no surprise. It’s apparently an attempt to recapture the mystique of the once-popular dune buggy based off the original, long-lasting VW Bug.  And to fast-forward to what’s likely to be the most frequent question, maybe, says VW, telling us “the Beetle Dune concept is a potential version of the design icon.”

Now, this isn’t the stripped-down Dune Buggy of the ‘60s, where customizers stripped almost everything out of the first-generation Beetle, often including the body itself.  This show car is a closed-top coupe and, in fact, borrows its sportier drivetrain from Beetle R-Line edition.

To emphasize what the maker describes as “go-anywhere intentions,” the Dune concept’s designers raised the body by two inches and then bolted a pair of skis onto the roof.

“The Dune concept shows the potential for a new production version of the sportiest Beetle ever,” suggests the maker, adding, “Its name, raised ground clearance, and all-terrain look hark back to the VW Bugs that conquered beaches and dunes in times past. In the summer, simply swap the skis for a sandboard.”

(VW squeezes subcompact fuel economy out of a midsize sedan with Passat Blue Motion Concept. Click Here to find out how.)

The good news is that this reborn Dune buggy would have a lot more power than the ones that were popular in the era of the Beach Boys.  It’s powered by a 210-horsepower turbocharged TSI engine paired with a 6-speed DSG dual-clutch transmission.  Torque goes to the front wheels, but an XDS electronic locking differential would help improve traction on either sand or snow.

Oh, and if you’ve also got a sense of déjà vu, yes, Volkswagen had previously tried to get back into the buggy business with a Dune concept based on the gen-2 “New Beetle” that it debuted at the Los Angeles Auto Show 13 years ago. Unfortunately, the maker says, that show car “was not very realistic, especially with its interior and roof structure.”

Apparently, this time, the concept shows what folks in the auto business like to call “production intent,” meaning that if it gets a good reception we’re quite likely to see it surf or ski into showrooms in the not-too-distant future.

(New Golf R will get VW back into the “hot hatch” segment. Click Here to check it out.)