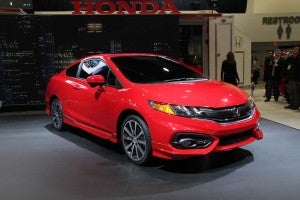 Strong demand for products like the Honda Civic Coupe combined with a weak yen to double quarterly earnings.

Honda more than doubled its quarterly earnings, much of that gain driven by the weak yen, while also picking up momentum in key markets including North America.

The maker reports it earned 160.7 billion yen, or $1.58 billion for the October-December period – its fiscal third quarter – compared with a 77.4 billion net profit during the same period a year ago.

Honda has been steadily expanding its global manufacturing operations – it now produces about nine of every ten vehicles sold in North America in the region – but favorable exchange rates nonetheless helped the third-largest Japanese maker deliver such a strong quarter, the weak yen credited with adding $4.2 billion, or 425 billion yen, to its revenues for the quarter.

The Japanese currency slipped to around 100 yen during the October to December period, compared to just 80 yen the year before.

Overall, Honda reported a 25% increase in quarterly sales, at 3.02 trillion yen, or $29.6 billion.  The figures also were buoyed by a nearly 10% jump in in sales of automotive products and an 11% increase in motorcycle sales.

Honda reported good news in not only North America but also in its home market of Japan, as well as the rest of Asia.  Like other Japanese makers, it had been suffering a slowdown in sales in China for several years due to consumer backlash over a political conflict between the two countries.

The positive impact of the weak yen might have been even more significant, Honda officials have suggested, if they were not moving to expand their regional operations around the world.  In North America, for example, a new Mexican plant is taking over production of the subcompact Fit currently produced in Japan.

U.S. imports of Japanese-made vehicles already declined by more than half between 2009 and 2013, while Honda’s American assembly plants saw their exports surge more than five-fold during the period, to 108,705 last year.

“This is really a significant milestone for our North American operations, and one that’s been 30 years in the making,” Honda Senior Vice President Rick Schostek said earlier this week, announcing that the maker had become a net exporter from the American market.

Honda was the first of the Japanese Big Three to announce its quarterly earnings, Toyota planning to report in next Tuesday while Nissan will follow on February 10th.

U.S.-based makers have also delivered strong earnings for what was their fourth quarter.  Ford led off with a net of $3 billion, or just slightly short of double its profit from the prior year.

(For the full report on Ford earnings, Click Here.)

Chrysler, meanwhile, announced it had quadrupled earnings for the final three months of 2014, though much of that $1.62 billion was due to a nearly $1 billion one-time gain. It will be the last time Chrysler will report as an independent company.  Earlier this month, Italy’s Fiat SpA completed its takeover of the Detroit maker. The combined company has been renamed Fiat Chrysler Automotive and will now be listed on the New York Stock Exchange as FCA.

(To learn more about the big changes behind FCA, Click Here.)