GMC Canyon Aims to Draw Buyers Back to Midsize Pickups

If GMC builds it, will they come? 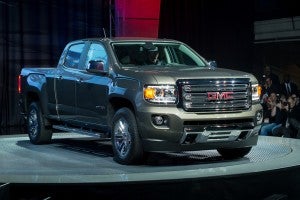 To paraphrase the familiar quote from the film, “Field of Dreams,” if General Motors builds it, will they come?  Midsize pickups, that is.  And with the launch of the 2015 GMC Canyon at the North American International Auto Show, the Detroit maker is bucking a trend that’s seen this once wildly popular market segment dwindle to little more than an insignificant niche.

Over the last couple years, both of GM’s cross-town competitors have abandoned the midsize pickup segment leaving only Toyota and Nissan to carve up the relatively few remaining buyers.  Back in the 1970s, midsize trucks actually outsold full-size models, and sales still were in the million range in the ‘90s. But in 2013, demand dipped to a mere 227,000.

That was a 14% year-over-year decline even as big rigs like the Ford F-Series, Chevrolet Silverado and GMC Sierra were enjoying a huge turnaround, collective sales surging to 1.9 million, up from just 1.1 million during the depths of the recession.

Despite that downward trend, GM introduced the all-new Chevrolet Colorado during the L.A. Auto Show last November and is following up with the sibling GMC Canyon in Detroit. 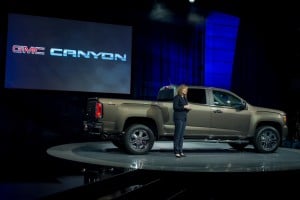 “We’re going to bring out trucks that redefines the segment,” insists Dan Ammann, the GM executive who will become the maker’s new president this week.

During a background session on the Canyon, GMC marketing chief Tony DiSalle added his own upbeat belief that, “This segment has a tony of opportunity for growth.”

DiSalle cites research that indicates there are plenty of buyers who would prefer a smaller, more nimble and fuel-efficient truck if they didn’t mean sacrificing comfort, convenience and performance.  In other words, they don’t want the pickup equivalent of stripped-down econoboxes.

Both the Chevy and GMC models start out with the same basic underpinnings, GM promising that provides a more rugged foundation than was offered in the old midsize trucks the maker dropped several years ago.  But like the full-size Chevrolet Silverado and GMC Sierra, a lot of engineering time was spent on improving the way the new midsize models feel and handle, with emphasis on quietness, comfort and safety – six airbags and a rearview camera being standard equipment on the GMC Canyon.

(Recall of 370,000 full-size pickups comes at a particularly bad time for GM. Click Here for the full story.)

The exterior designs are close enough that it’s easy to recognize the family resemblance, though the GMC model is a bit more refined, echoing the brand’s “professional grade” tagline.  The Canyon features a bold chromed grille, sculpted body panels and a wider stance that both enhances the truck’s athletic look and improves interior seating. 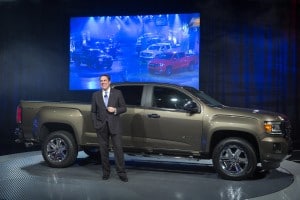 The cabin is far more refined than traditional midsize pickups, with soft-touch surfaces, plenty of storage nooks and a list of standard and optional technology features including the division’s latest touchscreen-based infotainment system.

There are plenty of little surprise-and-delight features designed in, such as the bumper-mounted step that makes it easier to access the Canyon’s cargo bed.

The maker also aimed at holding down weight – using an aluminum hood, for example – to improve fuel economy, though it won’t release mileage numbers until closer to the autumn 2014 launch.

Here’s however, both Chevrolet and GMC could run into trouble. What is expected to be the Detroit show’s biggest unveiling is a new “aluminum-intensive” version of the Ford F-150, the full-size pickup expected to shed between 500 and 750 pounds. That could boost mileage by 5 mpg or more, and make it harder to justify a midsize model, at least in terms of fuel savings.

(Click Here for a closer look at the new aluminum Ford F-150.)

Like its Chevy sibling, the GMC Canyon will be introduced with two powertrain choices – a 193-horsepower inline-four and a 302-hp V-6, both paired to six-speed automatics and offered in either two- or four-wheel-drive. A diesel powertrain option will follow for the second year on the market.

Pricing will also be announced closer to launch, though GMC typically carries at least a modest premium over the Chevy brand.

Looking back over the past decade, DiSalle notes that half of all former midsize pickup owners left the segment when it came time to trade in. But he prefers to see the half-full side of this glass, insisting the opportunity to draw buyers back is “huge.” General Motors will build them, now it will have to wait to see if buyers come.