General Motors Pulls off a Clean Sweep with North American Car, Truck of the Year 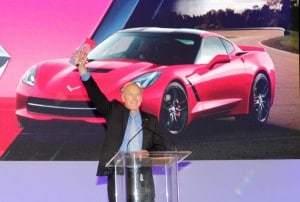 GM pulled off a sweep of the North American Car & Truck of the Year awards with the Corvette Stingray and Chevy Silverado taking the honors.

A year from the day after unveiling its all-new two-seat sports car – and nearly five years after plunging into bankruptcy – General Motors landed a clean sweep of the influential North American Car and Truck of the Year, company officials declaring that the two awards not only justified the bailout of the giant automaker but made it clear to the world that GM is back in the game.

Going into the opening ceremony at this year’s North American International Auto Show it was far from certain who would take the car and truck honors in what was seen by many members of the jury as perhaps the most competitive group of finalists in the 21 years of balloting for North American Car and Truck of the Year.

But GM scored big with the new Corvette which was coincidentally announced at the Detroit Auto Show on January 13, 2013, while it also landed a win for its new Chevrolet Silverado full-size pickup. 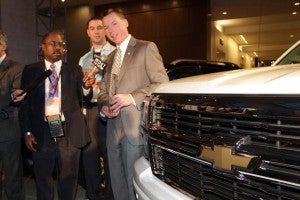 “This has been a great year for us,” declared Tadge Juchter, the head of the Corvette Stingray development program as he grasped the crystal North American Car of the Year trophy. “It put an exclamation point on what has been an unbelievable year for us.”

Indeed, the twin victories brought a broad smile to GM Global Product Development Director Mary Barra, who will become the first woman CEO of a major auto company later this week, as she watched from the audience.

“It all starts with great product,” she told TheDetroitBureau.com, adding that it is a “great moment” for a company that survived its 2009 bankruptcy only with the help of a nearly $50 billion federal bailout.

The real test of the company’s long-term potential, echoed Mark Reuss, who will take over Barra’s product development job this week, is in coming up with new products that will be vying for car and truck of the year honors in the future.  “It’s all about momentum,” he stressed.

GM had a better than even shot at winning the Car of the Year trophy as the Cadillac CTS sedan was one of the other finalists, along with the new Mazda3.

In the truck category, the Chevy Silverado was up against the new Jeep Cherokee and the Acura MDX sport-utility vehicle.

The Silverado has now won the North American Truck of the Year trophy twice, marking the fifth time a GM truck has won.

The Corvette, meanwhile, has won twice, now, previously being named North American Car of the Year in 1998.

(GMC aims to draw buyers back to midsize pickups. For more, Click Here.)

Over the years, Detroit’s Big Three makers have been named North American Car of the Year 12 times, while the Japanese have won three times and Europeans four times.  Korea’s Hyundai has won twice.

On the truck side, domestics have won 14 times, the Japanese four times and Europeans three.

(Click Here to see more about the Chevy Silverado.)

The North American Car and Truck of the Year were chosen by a jury of 48 automotive journalists from the U.S. and Canada. The awards are not affiliated with the North American International Auto Show.