Says he misspoke; automakers aren’t tracking where you drive. 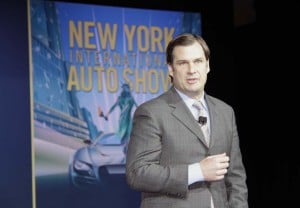 Jim Farley, Lincoln's brand boss and the global marketing chief for parent Ford Motor Co., is backtracking from recent comments where he said the maker was tracking driving information.

With Americans already worked up over the idea that the federal government’s National Security Agency is spying on their e-mails and phone calls, it’s likely little surprise that Ford Motor Co. Global Marketing Director Jim Farley touched off another furor this week when he told an audience at the Consumer Electronics Show that the automaker is tracking their travels thanks to their in-car navigation systems.

“We know everyone who breaks the law, we know when you’re doing it,” Farley said at the huge Las Vegas convention where he served as one of the headliners. The good side, he added, is that “We don’t supply that data to anyone.”

Small comfort. Make that no comfort. With the NSA spy scandal still a matter of headlines, Ford’s apparent use of Big Brother-style technology didn’t sit very well, generating its own flurry of stories – which the Detroit maker is now trying to back away from. In a follow-up interview on CNBC, Farley apologized and backtracked away from his comments at CES.

“We don’t monitor, aggregate data on how people drive. I’ve given people the wrong impression, I regret that,” he said.

The maker already raced to distance itself from Farley’s original comments.

“Ford is absolutely committed to protecting our customers’ privacy,” company spokesman Wes Sherwood said. “We do not track our customers. No data is transmitted from the vehicle without the customer’s express consent.”

The fact is that most of today’s cars are now equipped with some form of so-called “black box,” capable of gathering and storing at least some vehicle information, such as whether brakes were applied before an accident. The National Highway Traffic Safety Administration has proposed that such technology – a simplified version of what’s already in every commercial airliner – become standard equipment.

Experts say black boxes could make it easier to reconstruct accidents and, on a broader scale, improve overall automotive safety.

(Check out the 10 debuts to watch at the auto show. For more, Click Here.)

At this point, such devices have rarely been used in individual cases, such as the prosecution of a driver charged with causing an accident or speeding, though vehicle data recorders – as they are more accurately known – have assisted in such things as the investigations into alleged unintended acceleration problems involving Toyota vehicles.

Automakers have, until now, not collected GPS-based tracking information – or at least not admitted doing so. There are technologies available to do that, however. In fact, several small car rental firms have used trackers to penalize motorists who drive beyond areas covered by a rental agreement or who have exceeded speed limits. Federal and state regulators have generally taken a dim view of such Big Brother behavior.

(Click Here to get the details on Mulally’s non-departure to Microsoft.)

Could it become more common? Going forward, some experts believe the auto industry will expand the capabilities of their black boxes as autonomous technology becomes available – if for no other reason than to be able to demonstrate who was at fault if an accident occurs.

As for Ford’s Farley, it isn’t the first time the executive’s comments have created a flap for which he had to apologize, including one profanity-laced interview in which he wanted to take down rival General Motors. Farley is known within the second-largest Detroit maker for his “colorful” speech, which is often loaded with what insiders have come to call “F-Bombs.”