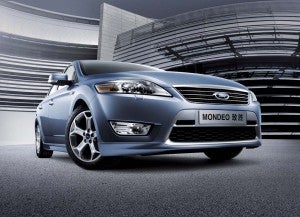 Ford's Chinese product line-up has grown rapidly helping the maker to a 49% sales increase in 2013.

Ford Motor Co. may have been a late entry to the Chinese automotive market, but it’s making up for lost time. The maker surpassed Toyota in overall sales in the critical Chinese market during 2013, according to new sale figures.

“2013 has proved to be a milestone year for Ford’s accelerated growth in China as we delivered on our plan to bring to China seven of Ford’s next-generation global vehicles, including the Ford EcoSport, the Ford Kuga, the new Fiesta, and the all-new Mondeo,” said John Lawler, Ford Motor China chairman and chief executive officer.

“In 2013, strong Chinese customer demand for our greatly expanded lineup of vehicles allowed Ford China to set yet another annual sales record.”

Lawler said Ford expects to make further inroads in the Chinese market by expanding capacity – its opening two new plants in the next few months as its spends $4.9 billion in its Chinese operations – as well adding the company’s dealership network across China.

Ford got a later start in China than rivals such as Volkswagen and General Motors, which are locked in a duel for sales leadership in China. As of the end of November, VW held a narrow lead over GM.

Nevertheless, Ford vehicles are catching on as the automaker’s sales apparently grew faster than any other manufacturer operating in China. The popularity of the Focus helped Ford’s sales in the country expand faster than any major competitor.

Toyota’s increase lagged the overall growth of the Chinese market. Despite the sales jump, Toyota remains well short of its goal of selling 1 million vehicles in China, which was originally announced by Akio Toyoda in 2011.

Honda set a sales record for the company’s Chinese operations as sales increased 26% to 756,882 units. Nissan, which has sold cars in China for 40 years, leads all Japanese brands in China and expected to sell 1.25 million units across China during 2013.

Japanese car sales recovered some of the ground they lost in 2012 when crowds burned dealerships and vandalized cars during diplomatic dispute between China and Japan over the ownership of small islands in the East China Sea. However, the growth of Japanese automakers in China is also hobbled by their concentration in Southern China, GM, VW and even Ford have broader coverage of the Chinese market, experts note.

The dispute continues to simmer, despite efforts by the U.S. to mediate the controversy. By treaty the islands, which were part of the Japanese colonial empire were ceded back to the back to China immediately after World War II. During the Cold War that followed the Chinese Communist rise to power in 1949, the islands became part of a Japanese defense perimeter in the East China Sea while Japan emerged as one of the U.S. closest and most reliable allies.

(Click Here for more about Ford’s ambitious plans for 2014.)