A brand that nearly vanished scores an unlikely turnaround. 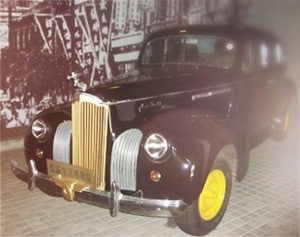 The last emperor's Buick shown at a Chinese museum.

Buick, a brand many expected to be abandoned when General Motors emerged from bankruptcy nearly five years ago has not only proved naysayers wrong but done so by turning in an all-time global sales record for 2013.

Ironically, the one-time pride of the gilded age of American capitalism owes its survival to one of the most powerful communist leaders of the last century.

Even as Buick City, its one-time home in Flint, Michigan was knocked down last year, the General Motors brand was gaining momentum on the opposite side of the world where it has become one of the most familiar names in booming China.  Credit last year’s nearly 16% increase in the overall Chinese automotive market for giving Buick the momentum to not just top the 1 million mark for the first time in 30 years but to set an all-time record. 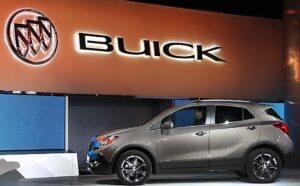 The Buick Encore has given the brand new momentum since its 2013 launch.

(GM now selling more vehicles in China than the US. Click Here for the story.)

That’s a big transition for a brand founded in the early days of the Detroit auto industry by David Dunbar Buick.  Incorporated in May 1903, it became one of the first brands of what became industry giant General Motors.

Its presence in China is a historical fluke. While Buick has largely been a North American brand for most of its history, there was a time when it became popular with foreign dignitaries and elite – including Pu Yi, the last emperor of China. His personal Buick survived through a series of disasters, including the Japanese occupation and World War II, and ultimately fell into the hands of Chou En-lai, long the second-in-command to Mao Zedong. Despite helping lead the Communist revolution, Chou was an unabashed automotive fan and Pu Yi’s Buick became the pride of his collection.

(Rose Bowl or Bust! Our intrepid reviewer takes a Buick Enclave on a cross-country trek. Click Here for the story.)

As the new Millennium approached, former GM Chairman Jack Smith approved the then-risky decision to build a car plant in Shanghai. But it wasn’t enough to come in with the huge investment needed to set up the country’s first modern automotive assembly plant.  Government leaders also wanted to ensure that the factory would build the “right” brand, Smith once recalled.  Surprisingly, they rejected Cadillac, as well as GM’s Chevrolet and European-based Opel brands.  Pointing to the emperor’s old car, they demanded nothing other than Buick.

It was an unlikely decision but one that proved to be Buick’s salvation.  As the Chinese car market has grown from an asterisk on the sales charts to become the world’s largest, dwarfing even the U.S., Buick has prospered.

And that posed a conundrum in 2009 when GM plunged into Chapter 11 protection and was ordered by the government to abandon half of its brands in return for a federal bailout.  While there was strong pressure to get rid of Buick, whose U.S. sales had fallen over 80% over the previous three decades, “It would have sent the wrong message to Chinese consumers,” recalled Ed Welburn, GM’s global design chief, in a conversation with TheDetroitBureau.com.

Instead, GM wound up pulling the plug on Pontiac, Saturn, Hummer and Saab.  Meanwhile, it began laying out plans to rebuild Buick.

Today, the brand continues to be sold in only a handful of markets, including North America, where it scored reasonably well this past year.  With an expanded line that includes the new Encore compact crossover, U.S. deliveries jumped 13.9% in 2013 — nearly double the pace of the overall market turnaround – to 205,509.  Demand was up 9.5% in Canada, while it sizzled at a 106.6% pace in Mexico.

But China was, by far, the biggest market accounting for sales of 809,918 Buicks such as the GL8 minivan and Excelle sedan.  Sales were up 15.7% in 2013, curiously the exact same pace of growth for the overall Chinese market.

Buick’s success there has posed a bit of a conundrum for GM which would prefer to put the focus on its two global brands, Opel and Chevrolet, but the last emperor’s influence is still being felt in terms of Chinese market demand where Buick rivals the likes of Volkswagen as one of the country’s most popular marques.

(Buick Regal gets a makeover. Click Hereto check it out.)

If anything, said Welburn, U.S. buyers have benefited from Buick’s success in China.  In that hotly competitive market, consumers want nothing but the best, especially in higher-priced segments.  Among other things, they demand makers provide lavish interiors with large, plush back seats – since a large share of Chinese owners prefer to be driven by chauffeurs.  With China dominant in sales, most new Buick products are being designed to meet those demands and that, Welburn said, means better products in North America, as well, even if Buick remains just a shadow of its former glory in the home market.