New 2-door expected to be nimbler, "more fun to drive." 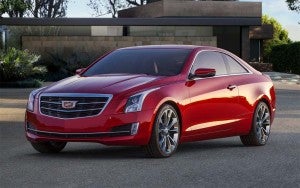 Cadillac has beefed up the performance and handling of the new-for-2015 ATS Coupe.

Cadillac’s downsized ATS sedan is about to be joined by a new coupe – which is making its debut today at the North American International Auto Show in Detroit. And it promises to be a seriously fun ride.

The 2015 ATS Coupe is the smallest 2-door ever offered by Caddy, and it follows a very different design direction from the earlier, over-the-top CTS Coupe and reflects the general toning-down of the edgy Art & Science design language Cadillac first introduced more than a decade ago.

“What you see is a clear progression for the brand,” explains Andrew Smith, Cadillac’s new executive design director, adding that the goal was to blend the familiar Cadillac hard creases on softer, more “subtle forms.” 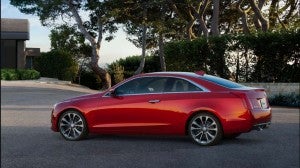 The ATS Coupe takes a more conservative approach to styling than the over-the-top CTS 2-door.

(Click Here for a complete round-up of all the new cars, trucks, crossovers, concepts — and headlines from the 2014 NAIAS.)

Cadillac scored a hit with the earlier ATS sedan which quickly racked up a series of solid reviews and awards – including being named the 2013 North American Car of the Year.

As with the earlier CTS Coupe, Cadillac officials acknowledge they aren’t looking for large sales volumes with the smaller ATS Coupe, but while demand has shrunk over the years, 2-door models still tend to provide a certain halo for a brand and they often attract the sort of influential buyers that, if satisfied, can act as brand ambassadors.

As with the bigger CTS model, the ATS Coupe is intended to be the more sporty model, Cadillac Executive Chief Engineer David Leone promising it “will be nimbler, it will be quicker, it will be more fun-to-drive.”

(10 debuts not to miss at the 2014 North American International Auto Show. Click Here to check them out.) 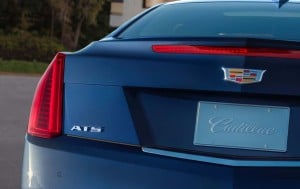 The ATS Coupe gets a wider track, front and rear, than the current ATS sedan.

The new 2-door has a 50/50 weight balance and  should be a bit more planted thanks to a 20 mm wider front track and a 40 mm wider rear track, which Leone explains, “enable us to get power to the ground more quickly.”

The new model ATS Coupe will offer buyers a choice of a 2.0-liter turbocharged four-cylinder or a 3.6-liter V-6.  The smaller displacement engine has been upgraded from the version in the current ATS sport sedan, now delivering the same 272 horsepower but an extra 14% more torque, at 295 pound-feet, which will allow it to launch from 0 to 60 in just 5.6 seconds.

The 3.6-liter package turns out 321 horsepower and 275 horsepower. Both engines are paired to a six-speed automatic gearbox.

Like the sedan, the new ATS Coupe is available with the Magnetic Ride Control system, an electronically controlled suspension that can respond to changes in road conditions and driver command in milliseconds. The basic suspension design features a five-link rear and multi-link double-pivot MacPherson strut up front.

Big Brembo brakes and 18-inch wheels round out the ATS Coupe package, while a mechanical limited slip differential and upgraded engine cooling, as well as adaptive headlights are optional.

Cadillac has yet to provide details, but a Vsport version of the new ATS Coupe is likely to follow.  An even more high-performance V-Series package, for both coupe and sedan, is expected, as well.