Is it crossover, wagon…or something new? 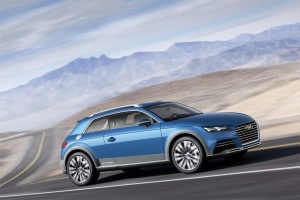 Audi's Allroad Shoot Brake concept may have observers wondering what it is: crossover, sport utility or station wagon?

Automakers seem to take delight in delivering new designs that don’t fall into any handy category. The idea is to find new “white space” that the competition hasn’t thought up yet. And that seems to be what Audi has in mind with the Allroad shooting brake it will formally unveil this week at the North American International Auto Show in Detroit.

The luxury maker alternately refers to the concept vehicle as a “crossover” and a “shooting brake,” a British term that usually translates into “wagon.” We can understand Audi’s reluctance to use that term, particularly in the U.S., where station wagons are anathema to most buyers. But call it what you will, the Allroad shooting brake concept picks up on the more sporty, wagon-esque stance that is quite popular in Europe and many other parts of the world. And it just might be handsome enough to click with American buyers, as well.

It better. Audi’s tech director, Dr. Ulrich Hackenberg, suggests the show car is “offering very concrete glimpses of the near future.” In other words, expect to see it in production in the very near future. 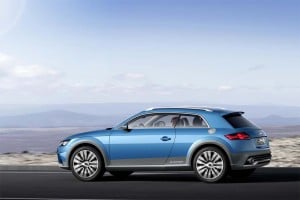 The Allroad occupies the "white space" where definition is difficult. What it is for sure? Fast doing zero-to-60 mph in less than five seconds.

While he doesn’t say so, it appears that the Audi Allroad shooting brake concept shares its basic platform with the new A3 family. The plug-in hybrid’s wheelbase is a mere 99 inches, total length 165 inches. The two-door show car is 73 inches wide and a modest 55 inches tall.

The look is clearly Audi, starting with the single-frame hexagonal grille framed by matrix LED headlamps and narrow fins added, Audi explains, to resemble the cooling ribs of an electronic component.

This is the first time Audi has combined its new e-tron plug-in drivetrain with one of its Allroad models. The combined output of the gas-electric driveline is 480 pound-feet of torque. Considering the Audi Allroad shooting brake concept weighs in at a mere 3,527 pounds, that’s enough to launch it from 0 to 100 kph (0 to 62.5 mph) in just 4.6 seconds, with an electronically limited top speed of 155 mph.

The system pairs a 2.0-liter turbo inline-four making 292 hp and 280 lb-ft with a pair of electric motors. The gas engine and a 40 kW motor drive the front axle, while an 85 kW motor provides power to the rear wheels.

The system can draw power from an 8.8 kilowatt-hour lithium-ion battery. And it can be operated in three modes, one prioritizing all-electric driving, while a hybrid mode balances performance and fuel-economy. The third, Sport mode, maximizes performance.

A charging port is mounted in the left pillar, while the fuel door is in the right. The skin of the Audi Allroad shooting brake concept, meanwhile, is a blend of lightweight, fuel-saving aluminum and carbon fiber-reinforced polymer. Notably, the seven-arm wheel rims are made of CFRP.

Aluminum skid plates are meant to give the show car a more rugged – yet upscale – appearance than the typical crossover. That fits with the theme of the show car, Audi suggesting, “The versatility and functionality of the Audi Allroad shooting brake is ideal for young, sporty and active people. In the winter in California, for example, they could drive the car from Los Angeles to the San Gabriel Mountains for snowboarding in the morning, and then head out to at Venice Beach for some kite surfing in the afternoon.”

The anthracite and rock gray interior features a mix of upscale materials, including leather, aluminum and an alcantara roofliner. The IP is intended to suggest the wing of a modern aircraft, the air nozzles a jet engine. One of the more intriguing design touches allows the center console to move along with the driver’s seat as it slides back and forth, keeping controls like the e-S-tronic shift lever and MMI multimedia controller within easy reach.

The infotainment system, meanwhile, features a new, smartphone-like user interface, and a new 12.3-inch display provides a near laptop-sized readout. The new Audi phone box links the cellphone to vehicle electrical system and can charge wirelessly.

How soon might the Audi Allroad shooting brake be transformed from concept from production vehicle? The German maker isn’t saying precisely, but the fact that Dr. Hackenberg refers to the “near future” would suggest we just might see a production model before year-end, perhaps at the Paris Motor Show this coming autumn.