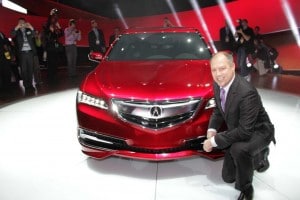 Officially, Acura is calling it a “prototype,” but the reality is that the new TLX debuting at this year’s North American International Auto Show will be showing up in Acura showrooms by mid-year. In fact, a racing version of the 2015 Acura TLX will be ready to roll even sooner.

And Honda’s luxury division can’t wait. Though it was the original Japanese luxury carmaker, Acura has been struggling to break into the first tier of upscale brands in recent years.  It’s done a credible job with its crossover-utility vehicles, the strong-selling RDX and MDX models, but it can use a boost on the traditional passenger car side of the sales charts.

That’s where the 2015 Acura TLX comes in.  Make that “fills in.” The new model replaces the largely forgotten TSX and more precisely delivers the sort of midrange size, performance and features needed to slot between the current entry-lux Acura ILX and flagship RLX sedans. 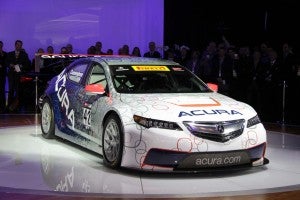 Acura plans to put its TLX GT on a race track sometime next year.

“The TLX will serve as the backbone of the Acura sedan line-up,” said Mike Accavitti, senior vice president of American Honda Motor, Co., during the new model’s auto show preview.

The TLX Prototype, in its “Athletic Red Pearl” paint has a more lithe shape than the old TL, with the emphasis on “athletic” proportions. It boasts a lower, wider stance with shorter front and rear overhangs and a more sculpted body.  Exterior includes LED headlamps and 20-inch, five-spoke alloy wheels.

The basic design is expected to carry over into the production TLX, thought the 2015 model will likely lose a few of those over-the-top details that typically define a show car – here, for example, the row of LED lights fused to the base of each sideview mirror.  They flash in sequence when the turn signals are activated.

Dimensionally, the TLX is about 3.8 inches shorter than the outgoing TL, at 190.2 inches , but rides on the same 109.3-inch wheelbase. 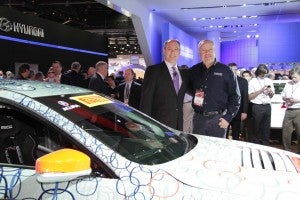 The production model will be offered with a choice of a VTEC 2.4-liter inline-four engine, or a 3.5-liter V-6.  The maker isn’t ready to provide either power or fuel-economy ratings, though it says it is targeting EPA mileage ratings at the top of the midsize luxury sedan class.  The smaller engine will be paired with a new 8-speed dual-clutch transmission, with the 3.65-liter V-6 getting a new 9-speed automatic.  Both models will be offered in front-drive configuration, while the 3.5-liter will also offer an optional all-wheel-drive package.

In front-drive, the TLX will feature Acura’s Precision All-Wheel Steer, or P-AWS, technology, which uses independent toe control to improve its grip and handling.

The four-wheel-drive models will get Acura’s Super-Handling All-Wheel-Drive, or SH-AWD technology, which offers torque vectoring capability. That shifts torque to the wheel’s that need it most, with an emphasis on aggressive handling.  For example, entering a hard corner, the outer wheels get more torque to help steer through the turn.

(Acura teams up with Jerry Seinfeld for new ads. For more, Click Here.)

Expect a “vault-like” experience in terms of noise levels, promised Accavitti, adding that the TLX is expected to have one of the largest cabins in its segment.

The TLX debut comes a year after the Detroit introduction of the latest-generation Acura MDX, which was a finalist for North American Car of the Year. Acura could clearly use a hit on its passenger car side.

But even before the market will judge, the Japanese maker will be looking for victory on the track. It used its news conference to also reveal the new Acura TLX GT race car which will be campaigned by the maker’s motorsports partner Real-Time racing. Powered by a twin-turbo version of the 3.5-liter V-6, the TLX GT will begin racing in the Pirelli World Challenge, starting in just a matter of weeks.