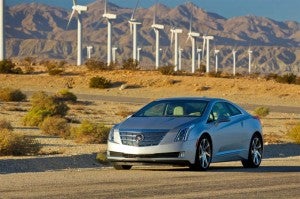 Cadillac's ELR allows a driver to send more energy back to the battery with the tap of a paddle shifter.

Paddle shifters have become increasingly commonplace in recent years, a way for motorists to get a more sporty feel from vehicles equipped with an automatic gearbox – but Cadillac has taken an alternative approach with its new ELR plug-in hybrid which uses its paddle shifters to increase the amount of energy that can be regenerated and stored in its battery pack.

Dubbed Regen on Demand, the new system was honored as “Green Car Technology of the Year” during a ceremony at the 2014 Washington Auto Show, beating out nine other environmentally friendly technology including a new Audi turbodiesel, a super-light carbon fiber body from BMW and Hyundai’s new hydrogen fuel-cell system.

“Ever-increasing efficiency is crucial to our driving future,” said Ron Cogan, publisher of the magazine Green Car Journal, which organizes the annual award, who called the Cadillac Regen on Demand technology, “an intriguing feature that adds a new dimension to the driving experience.”

A key to their efficiency, regenerative braking is used on all hybrids, plug-ins and battery-electric vehicles, recapturing energy normally lost during braking or coasting.  What’s unusual about the system on the Cadillac ELR is that drivers can depress the paddles on the steering wheel to increase the amount of regen when they want to slow down more quickly.  It’s similar to what happens when a motorist downshifts a conventional transmission – except that it has the added benefit of sending even more energy back to the battery.

“It provides a more engaged, satisfying driving experience,” Chris Thomason, chief engineer on the ELR program explained. “When you consider the added benefit of recapturing energy, it’s also a smart thing to do.”

The ELR is an upscale version of the more mainstream Chevrolet Volt.  It not only offers a more lavishly equipped cabin but improved performance, as well, launching from 0 to 60 in as little as 9 seconds, about a second faster than the Chevy plug-in.  Yet the ELR maintains roughly the same battery range, 35 miles per charge, before its small internal combustion engine kicks in.  The Regen on Demand system helps the Caddy achieve an EPA rated 90 MPGe, or miles per gallon-equivalent.

(Sales of plug-based vehicles doubled in 2013. Click Here for more.)

A total of ten different systems were finalists for this year’s award, including:

Launched in 2013, the first Green Car Technology of the Year award went to Mazda’s light and fuel-efficient SkyActiv system.

The use of the Washington Auto Show to hand out the award seems appropriate considering about a third of the vehicles on display this year utilize battery, clean diesel, hydrogen or other more environmentally friendly powertrain technologies.