German maker investing in plants to beat mark again in 2014. 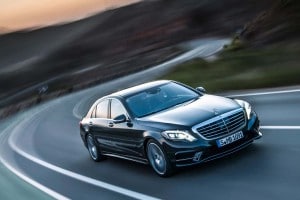 Mercedes-Benz expects to set new production and sales records for 2013. The world’s oldest carmaker produced 1.49 million vehicles, which would be the third year in a row setting a new mark.

“In 2013, we have taken a decisive step forward in our strategy for growth. Our model initiative is well under way. At the same time, we are also optimizing our internal sales structures,” said Ola Källenius, member of the Divisional Board Mercedes-Benz Cars responsible for Marketing and Sales, who added Mercedes was also was well positioned for another record year in 2014.

The new CLA, which is the third vehicle in the compact car family and the first that Mercedes-Benz has also made available to the U.S. market, quickly became a top seller helping the German maker to another record year, Källenius noted. In only four months, more than 12,000 CLAs were delivered to U.S. customers.

Additionally, demand for the new S-Class was so high in the few weeks following its launch this past summer that it has become the best-selling luxury sedan in the world.

Mercedes’ plant in Sindelfingen, Germany, had to ramp up to full production quickly to handle the demand, which was met with a two-shift operation. Production is currently running to full capacity at an output of around 460 vehicles per day: the highest daily output ever for the S-Class.

The company invested 1 billion Euros to expand production capacity at the Sindelfingen plant in 2013 as part of the Mercedes-Benz strategy for growth. The maker also invested 1.2 million Euros in the Rastatt plant to ensure demand for its new compact cars could be met as well.

Mercedes plans to invest more than 1 billion Euros into the Bremen, Germany, site to handle expected demand for the new C-Class, as well as 300 million euros in additional powertrain capacity at the Romanian subsidiary Star Transmission.

The German maker and its Chinese partner, BAIC, are investing about 4 billion euros to expand local production as well as build a new engine plant in China. In October, the Stuttgart, Germany-based carmaker announced that the next generation of the C-Class and the new GLA would be produced at a plant near São Paulo in Brazil, for which a further investment of around 170 million euros is planned.

In addition, 2013 was also a key year for the passenger car business in China where Mercedes-Benz has lagged behind key rivals, such as Audi and BMW.

Since starting up the new sales company Beijing Mercedes-Benz Sales Service Co. Ltd. in March, business in China has gathered pace and is steadily growing. With the market launch of the A-Class in spring and the premieres of the long-wheelbase version of the E-Class and the new S-Class in autumn, three key model series have been introduced in the Chinese market this year.

China is now the largest market for the S-Class, which has been specially tailored to the needs of Chinese customers.

(Click Here to see more about the GLA production launch.)

More than half of all S-Class sedans are sold in China, which is also one of the top markets for the E-Class. A hybrid version of the luxury-class sedan, the E400 is the first Chinese-made hybrid from a German premium carmaker.

Mercedes-Benz has also opened 75 new dealerships in China, including 36 in cities where the brand had not been represented before. The smart dealer network is also growing. By the end of the year there will be around 100 sales and service outlets in 70 Chinese cities.