But Detroit marques also planning to up output. 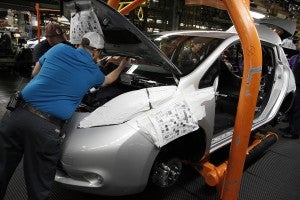 Nissan, Honda and several foreign automakers are increasing the number of vehicles they produce in North America.

With the upcoming start of production at its new plant in Celaya, Mexico, Honda expects that as much as 90% of the vehicles it sells in North America will soon be produced locally. And it’s not alone. Toyota, Nissan, Volkswagen and other so-called “imports” are steadily expanding their own production bases in the U.S., Canada and Mexico, ramping up regional production just three decades after Honda opened the first Asian-owned “transplant” assembly line in Marysville, Ohio.

In fact, a new study says foreign makers will account for well over half of all added vehicle production in North America by the end of the decade, primarily from new Japanese plants like Honda Celaya and the recently opened Nissan manufacturing complex in Aguascalientes, Mexico.

While that may be worrisome for Detroit makers, it’s good news for those who want to see the U.S. – along with Canada and Mexico – bring back manufacturing that has, in recent decades, migrated offshore, said Mike Jackson, a senior manager at the consulting firm IHS Automotive, who said that, “At no time in recent years has the North American market been better positioned.”

The IHS report offers a sense of relief after a decade of sharp production cuts, particularly by the three Motor City makers who closed scores of plants and eliminated hundreds of thousands of jobs in the years leading up to the Great Recession and the subsequent automotive market collapse that saw General Motors and Chrysler go through bankruptcy.

Since the market hit bottom, said Jackson, the industry has brought back about 4 million units of capacity. Chrysler, for example, decided to upgrade, rather than close, an assembly plant in the Detroit suburb of Sterling Heights that it had planned to abandon following its run through Chapter 11.

While the Detroit makers have avoided adding new plants they have nonetheless expanded operations where demand has justified.  Just this week, GM announced plans to invest $1.3 billion in five existing operations in Michigan, Ohio and Indiana.

But sensing an opportunity to both increase share in the U.S. while also using North America as an export base, the biggest growth will come from plants operated by Asian makers and, to a lesser degree, the Germans, according to IHS.

During a presentation at the firm’s suburban Detroit headquarters, Jackson forecast that Honda and other Asian brands will be adding capacity to build almost 1 million more vehicles by 2020, with the Germans likely to boost their own production by 700,000.

The flood of added capacity is taking place as the U.S. market, in particular, is undergoing a significant revival, sales surging from less than 10 million during the depths of the recession to more than 15.5 million for all of 2013. And various forecasts estimate that volume will surge to anywhere from 16 million to 16.5 million next year. But few expect there to be significantly much more upside potential in the U.S. which raises the specter of another excess capacity situation like the industry experienced in the years leading up to the recent downturn.

That could pose a disastrous scenario of price cuts, incentive wars – and even a new round of plant closings if the economy were again to falter.

But there are several big differences this time.  For one thing, much of the added capacity will offset imports. As plants like the Toyota factories in Indiana and Mississippi have opened in recent years, the share of the market made up of foreign-assembled cars has already dipped to 30%, according to IHS. The new study predicts this will plunge to just 10% by 2020.

Meanwhile, North America is becoming an increasingly popular export base.  A sizable chunk of capacity from the new Nissan and Honda plants in Mexico, for example, are earmarked for markets are far flung as Latin America, Europe and Asia. The new Audi plant will be a global production base, as well. The Mercedes-Benz and BMW plants in the U.S. already are some of the market’s biggest auto exporters.  The Mercedes factory in Alabama, for example, is the only source for the maker’s M-Class SUV.

(Click Here to see out the global fleet could double in size.)

U.S. auto exports alone, according to Jackson, could top 2 million by 2020.  Meanwhile, Mexico is already the world’s fourth-largest auto exporter behind Japan, Germany and South Korea – and ahead of the United States. Of those 2.9 million cars produced “South of the border” last year 2.1 million, or roughly 70%, were shipped across Mexico’s borders.

Until recently the world’s largest automotive market, the U.S. is now second to China. And IHS projects that emerging markets could soon double the number of vehicles on the world’s roads.

This will create “additional opportunities to take advantage of global growth through exports,” said Jackson, something he called a “really striking” reversal of trends in which the flow of cars was largely one way into the U.S. market.