FCV Concept to share stage with FT-86 convertible, other concepts. 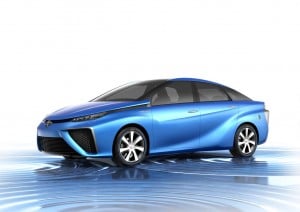 Toyota is planning to introduce its FCV, Fuel Cell Vehicle, during the Tokyo Motor Show later this month. It's expected to go on sale in 2015.

The Tokyo Motor Show has a history of mixing the wild and wacky with the futuristic, and the eight different models Toyota plans to reveal during the upcoming event underscore that reputation – while also giving a good look at several models soon to join the giant maker’s line-up, including a new hydrogen fuel-cell vehicle Toyota plans to launch in 2015.

Also on tap: a convertible version of the FT-86, the product of a joint venture with smaller Japanese maker Subaru. The original coupe version is also being sold, in various markets, as the Scion FR-S and Subaru BRZ.

In keeping with Tokyo tradition, the Toyota line-up adds such eccentric offerings as the skateboard-like FV2, which abandons the traditional steering wheel, and the golf cart-like Toyota iRoad.

But the big news is likely to be the debut of the Toyota FCV hydrogen car. 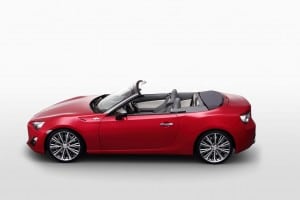 Toyota's FT-86 Open Concept, which it produced with Subaru, will turn heads in Tokyo this year.

A decade ago, before the emergence of battery power as the dominant alternative technology, fuel-cell vehicles seemed the wave of the future. The technology forces ultra-light hydrogen gas into a device called a stack where it combines with oxygen from the atmosphere to produce a stream of electric current. The only thing coming out of a fuel-cell vehicle’s tailpipe is water vapor.

But the technology has some serious challenges, notably including the lack of a hydrogen production and distribution infrastructure – a major reason why battery cars became the new darling of environmentalists. Now, with battery technology revealing its own problems, hydrogen is regaining momentum. Honda has already marketed a limited number of FCX fuel-cell vehicles and plans to soon introduce a new model. Hyundai also has promised to deliver a hydrogen car, while General Motors and Mercedes-Benz are also pressing forward with the technology.

Toyota will deliver a production version of the FCV concept to dealers starting in 2015. The concept coming to Tokyo is designed to look like “a catamaran and evoke flowing water,” the maker explains. The production model is expected to share the basic appearance of the new Tokyo concept vehicle.

Under the skin, Toyota says it has developed a new, light and efficient fuel-cell stack that will draw hydrogen from two high-pressure storage tanks. Significantly, they will provide enough of the gas to power it for up to 500 km, or 325 miles. Meanwhile, Toyota claims the FCV could be refueled in as little as three minutes. 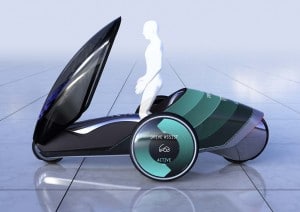 Toyota doesn't disappoint when it comes to introducing thought-provoking designs like the FV2 Concept.

That is, of course, if one can find a place to gas up. But Japan is pushing to develop a network of hydrogen stations, as is Germany, which envisions having 100s of alternative power centers – which would provide both hydrogen and electric rechargers – across the country. California, meanwhile, is expected to take steps of its own to set up as many as 100 hydrogen stations by decade’s end. There are currently a handful of places an FCV owner could gas up today, most based in the greater Los Angeles area.

The other production models and concepts Toyota will bring to Tokyo include a mix of alternative and conventionally powered vehicles.

One of the most eagerly anticipated offerings is the FT-86 Open, a roadster version of the wildly popular Toyota FR-S coupe developed in a joint venture with Subaru – which also provides the vehicle’s boxer-style engine. It is widely anticipated that the convertible version will be put into production by both Toyota – and its Scion division in the U.S. – and Subaru, most likely as a 2015 model.

Toyota’s display will hold true with Tokyo Motor Show tradition, where wild and wacky vehicles are a much beloved tradition.

Among them, the Toyota FV2 Concept, which the maker explains, “is a concept car that can express Toyota’s “Fun to Drive” philosophy even in a future world in which vehicle technology has greatly progressed. The vehicle enhances the driving experience by connecting physically and emotionally with the driver, becoming more fun to drive the more it is used.”

(Click Here to see Honda’s offerings at the SEMA show.)

There’s no steering wheel.  Instead, the driver turns the FV2 much like a skateboard, shifting their weight left or right, forward or back. The idea? To develop “a relationship similar to the relationship of trust and understanding that a rider might have with his or her horse.”

Also on tap, the tiny i-Road concept, which, Toyota explains, provides the mobility and convenience of a motorcycle with the comfort and stability of a car. The maker actually plans to begin real world testing of the prototype next year and could place a production version into Japanese car sharing fleets.