Tokyo Motor Show Likely to be as Wacky as Ever

From rolling phone booths to, well, something strange on wheels. 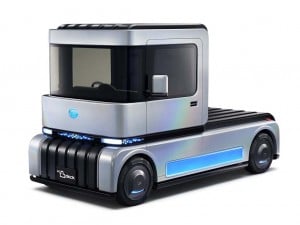 The Daihatsu FC Deck is due for a formal introduction at the Tokyo Motor Show this month.

Unlike most major auto shows, organizers in Tokyo stage their big automotive extravaganza just once every other year, a seemingly odd schedule considering the importance of both the Japanese market and its home auto industry. But, then again, it just may take two years for manufacturers to dream up some of the wild, weird and wacky concept vehicles that have long been a hallmark of the Tokyo Motor Show.

With the show still several weeks away we’re just beginning to get a first look at some of what’s in store for the 2013 Japanese event. But the images provided by minicar maker Daihatsu suggest that this year’s Tokyo Motor Show won’t be letting us down.

In fact, Daihatsu may be taking things to extremes, coming up with the sort of name singer Prince could have appreciated when he was known by an unpronounceable symbol.  It’s hydrogen-powered concept has been dubbed the FC凸DECK.  And we can only wonder how we’re supposed to pronounce that middle icon.  (Some interpretations probably aren’t appropriate for a G-rated publication.) 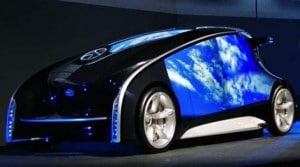 What Daihatsu tells us is that the FC is a fuel-cell-powered minitruck. How mini? It’s only about a foot longer than the Scion iQ minicar – and a full eight inches narrower.  If a production model makes it out of the show it would enter the peculiarly Japanese segment known as “kei” cars.

Daihatsu has been the source of some of the oddest – and occasionally most clever – concepts to grace the Tokyo Motor Show floor, but it’s by no means alone.  Even major manufacturers, such as Toyota and Nissan, seem prone to roll out truly head-scratching show cars. 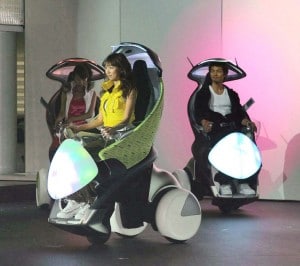 The biggest of the Japanese makers once introduced a 1-seat design that, when powered down, essentially ejected its driver much like a candy bar from one of the ubiquitous vending machines found all over the Japanese capital. Two years ago, Toyota brought out the Fun VII, a 13-foot, three-seater which could be fully customized, both inside and out, with the touch of a button. 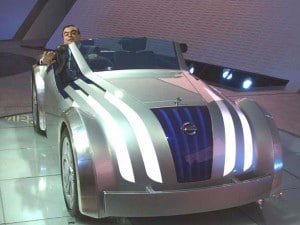 Carlos Ghosn helped kick off the 2003 Tokyo Motor Show by driving in behind the wheel of the Nissan G2.

Clearly, Carlos Ghosn, the CEO of Nissan, was having a great time, as you can see here, when he made his entrance into the 2003 Tokyo Motor Show behind the wheel of the curious C2 concept which, he explained, reflected “Nissan’s rich heritage.” The concept roadster wasn’t quite retro, but it definitely used hints of the 1930s to offset creatively futuristic features, such as light bars that began at the bumper then curved all the way up to the windshield. While the G2 never made it into production Ghosn’s suggestion that it “push(ed) the limits of what is possible” can be seen in some of the maker’s most recent real world designs.

With its crowded city streets, Japanese buyers have long favored tiny vehicles, such as those in the kei segment. But that doesn’t mean motorists want them to look small.  Witness the curious Fuya-jo of a few years back, which a Honda official likened to a “telephone booth on wheels.” (And it actually did offer a place for students to cram inside for mobile partying.) 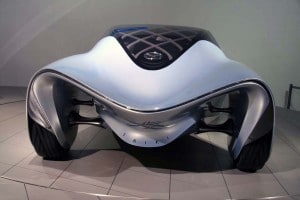 It's hard to tell whether the Mazda Taiki concept would be more appropriate in a space movie -- or perhaps in an aquarium.

Tokyo doesn’t have a monopoly on wild and wacky concepts. U.S. auto shows have introduced plenty of extreme machines over the years, including the bubble-topped GM Firebird Concept. But these days, manufacturers have largely shifted course and most show cars today tend to be thinly disguised versions of upcoming production vehicles, or are designed to test waters for new styling concepts.

Tokyo continues to embrace the extremes, even when it comes to vehicles meant to introduce a new design language, as Mazda did, in 2007, with the Taiki concept, part of an evolutionary series that eventually yielded the sweeping shapes of the new Mazda6 and Mazda3 models now in showrooms.

Subaru offers a tease of the Levorg Concept coming to this year's Tokyo Motor Show.

That’s apparently the path Subaru is taking with an assortment of show cars it will bring to the Tokyo Motor Show this year, including the awkwardly named – but elegantly shaped Evorg, as well as its Cross Sport Design and Crossover 7 Concept.  The latter, a 3-row CUV, is expected to serve as the replacement for the unloved Subaru Tribeca which will end its largely ignored production run at the end of the 2014 model-year.

(For more on the Subaru Levorg and the maker’s other Tokyo Motor Show concepts, Click Here.) 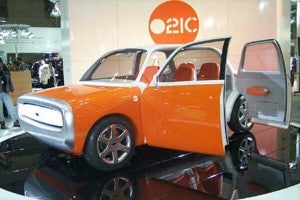 Incidentally, while Japanese manufacturers typically dominate the wacky category when its time for the biennial Tokyo Motor Show, they occasionally get some competition from abroad.  Ford Motor Co. delivered a real stand-out when it introduced the 021C at the first Japanese show of the new Millennium.

If you didn’t get it, well, “then you’re probably not meant to,” said Marc Newson, the celebrated British product designer who got a chance to design his first car for Ford’s Tokyo exhibit. Forget fancy electronics and futuristic powertrains, the in-your-face 021C was all about going back-to-basics.  “It’s not trying to be a profound statement,” acknowledged Newson, who’d previously tried his hand at everything from pop bottles to aircraft interiors.  “But it’s a happy statement.  This industry takes itself very seriously, but I come from a different perspective.”

What other off-the-wall concepts might the 2013 Tokyo Motor Show bring? Expect to see plenty more between now and the opening of the event’s media preview in just a couple weeks.