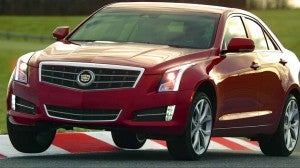 Despite winning wide praise for its improving quality and well-reviewed new products, General Motors has been steadily losing market share, and that is raising concerns about the maker’s competitiveness, according to a new report from the General Accounting Office, which continues to monitor the U.S. Treasury Department’s investment in the Detroit maker following its 2009 bankruptcy.

The Treasury took a majority stake in GM but has been rapidly selling down its shares in recent months and expects to sell off the last of its holdings by next April – with the latest government report estimating taxpayers will ultimately lose about $9.7 billion on the bailout.

On the positive side, the GAO report said the globe’s second-largest maker “has shown increasingly positive financial results” since its emergence from Chapter 11 protection, with “positive and growing operational cash flow, and a stable liquidity position.”  On the downside, “However, GM faces continued challenges to its competitiveness. For instance, its market share of vehicles sold in North America remains smaller today than in 2008. Furthermore, GM continues to carry large pension liabilities,” the report noted.

GM’s slide has come as a surprise to many analysts – and a disappointment to the maker itself – considering the widespread praise received for new models such as the Cadillac ATS, which was named North American Car of the Year last January.  Meanwhile, GM has been lauded by third-party observers such as Consumer Reports magazine and J.D. Power and Associates, for its sharply improving quality.

But the company has failed to gain market share again this year. In fact, GM market share is down slightly despite Chairman and CEO Dan Akerson’s prediction back in January that the maker would gain a bit this year.

GM officials defend the company’s record from the findings of the GAO, which also noted the company faced potentially difficult negotiations with the United Auto Workers in less than two years.

“Today’s GM is helping lead a resurgent auto industry that is creating new investments and jobs in America’s economy. We appreciate the acknowledgement of our substantial progress which is the result of producing cars and trucks that customers love. That’s why we remain the market share leader in the U.S.,” the company said in response to the GAO report.

Despite the concerns raised by the government, GM received a crucial endorsement on the financial side when it recently saw its credit rating upgraded by Moody’s in September. Achieving an investment grade rating has been one of the key goals of CEO Akerson.

As of September 18, 2013, Treasury has recovered about $35.21 billion of its $51 billion investment in GM and reduced its ownership stake from 60.8% to 7.32%. By early 2014, Treasury plans to fully divest its GM common shares through installments and estimates that it will lose at least 19% of its original investment.