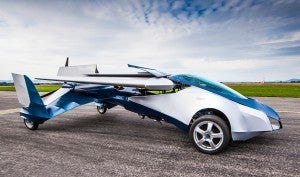 Aeromobil 2.5 uses carbon fiber wings and a Rotax engine to power it on the ground and in the air.

Every few years, an inventor gets the public a little closer what was once envisioned by Henry Ford: a flying car.

“Mark my word: a combination airplane and motor car is coming. You may smile, but it’s coming,” Ford is often quoted as saying later in his life.

The latest iteration is Aeromobil, the brainchild of Slovakian engineer Stefan Klein. Actually, Klein recently rolled out version 2.5 of the vehicle and is already working on 3.0. 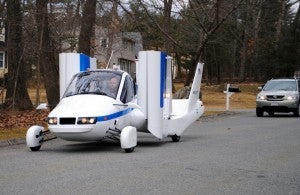 The Transition can go 410 miles while using premium automotive gas.

When driving, it looks like a single-engine plane has been folded up like an unfinished Transformer. The vehicle’s carbon fiber wings slide in behind the cabin or cockpit and the propeller disengages.

The Aeromobil 2.5 uses a 100-horsepower Rotax airplane engine, and can travel 430 miles on a load of fuel in the air or 310 miles on the ground.

Klein has been working on the idea for nearly two decades, and expects version 3.0 of the Aeromobil could be a production-ready version. No potential pricing was available. A video showing the Aeromobil pulling into traffic and wending its way to an airport where it takes off, although it never seems to get more than 20 or 30 feet off the ground.

Zipping through the sky like The Jetsons has been the dream of many and there have been several other versions of a flying car over the years. Most recently, Terrifugia, a Massachusetts-based company, has been refining its flying car, the Transition®, during the past five years.

(Toyota Motor Show will be as wacky as ever. For more, Click Here.)

A steering wheel and gas and brake pedals on the ground make it familiar to drive while a stick and rudder pedals provide responsive control in flight.

While not as impressive looking while traveling down the road, the Transition performs in a similar manner, but seems closer to being available to the public. Terrifugia is taking orders for the $279,000 machine, including $10,000 deposits.

The Transition runs on premium unleaded automotive gas, the same engine powers the propeller in flight or the rear wheels on the ground. It can go 410 miles in flight and averages 35 mpg in driving mode, according to the company. Converting between flight and drive modes is comparable to putting down the top on a convertible.