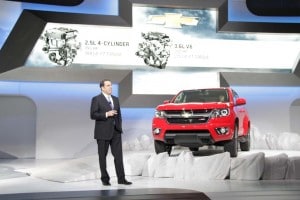 With the launch of the 2015 Colorado, Chevrolet gets back into the midsize pickup game.

Does Chevrolet know something its Detroit rivals don’t? Then again, how it final figured out what key Japanese rivals have long known?  Those may seem like cryptic questions but the fact is that the General Motors brand — along with sibling GMC – is about to become the only domestic maker present in the midsize truck market currently owned by import rivals Toyota and Nissan.

The debut of the new Chevrolet Colorado is one of the big announcements at this year’s L.A. Auto Show.  It marks the return of GM’s biggest brand to the downsized pickup segment after a several-year absence during which rivals Ford and Chrysler also walked away from the once-huge compact truck market.

It wasn’t quite as simple a decision as it might seem to introduce the new Colorado.  Back in the 1970s and ‘80s, small pickup trucks were hot.  They became an affordable alternative for Baby Boomers just getting their first set of wheels. But in recent decades, the market shifted and more and more buyers migrated to full-size pickups.  That’s why Ford dropped out of the market segment, abandoning the long-running Ranger (though it continues to sell a newer version overseas where full-size trucks are relatively rare). 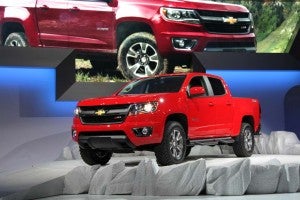 Chevrolet will offer both a fuel-efficient I-4 engine and a more powerful V-6, with a diesel coming a year later.

Today, the Toyota Tacoma is the quarter-ton gorilla, selling almost three times more than second-place Nissan Frontier. But add the few remaining entries in and Americans still only bought about 200,000 midsize pickups during the first 10 months of this year, barely 1.5% of the overall market. The industry – primarily Detroit – sold almost 10 times as many full-size trucks.

So, why would Chevrolet even bother? For one thing, the maker is betting that the midsize truck segment has bottomed out and that it can ride the hoped-for upswing.  And some analysts believe the market could be ready to rise again.  There’s the general trend towards downsizing as American motorists become more focused on fuel economy.  Millions of buyers are migrating from large SUVs, for example, to midsize and compact crossovers.

And then there’s the long-held – and long justified – belief that nothing makes an old segment show new life than adding fresh sheet metal, whether with updated or all-new products.

“Our strategy is simple: meet the needs of the broadest possible customer base, and let them choose precisely the right truck to meet their needs,” said Mark Reuss, GM president of North America. “The all-new Colorado benefits from the solid foundation established by the Silverado, and it reinvents the midsize truck, while reinvigorating the segment at the same time.” 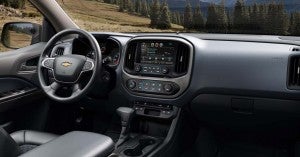 No econobox, the new Colorado will feature a well-appointed interior with plenty of standard and optional technologies, including an 8-inch touchscreen.

GM is clearly hoping that the nascent success of the new, 2014 Silverado will rub off on the Colorado. But where full-size pickup buyers are normally the most loyal when it comes to individual brands – and to domestic models, in general – Detroit has relatively little pull in the midsize segment, one reason it pulled out. Then again, Chevrolet is hoping that if Colorado connects, it will attract a young audience away from the imports.

(Tesla may be looking at a new battery-powered pickup. Click Here to find out more.)

Along with the GMC Canyon, Chevy’s new truck will go on sale next fall as a 2015 model.  GM appears to be unveiling it early – and notably in California – to reach out to young, import oriented buyers, knowing it needs time to build buzz.

The maker is claiming that Colorado will be the segment’s most powerful entries, with a choice of either a fuel-efficient base 193-horsepower 2.5-liter four-cylinder engine, or the bigger 302-hp 3.6-liter V-6 rated to haul and tow up to 6,700 pounds.

Perhaps more significant is the decision to begin offering a 2.8-liter Duramax diesel in the 2016 model-year.  Though diesels are common in heavy-duty pickups, only Chrysler currently offers a fuel-sipping “oil burner” in a full-size model and there are no diesels in midsize trucks sold in the U.S.

“We designed the Colorado to be the most versatile and most capable in its segment, bar none,” said Jeff Luke, executive engineer, GM Trucks. “Not everyone needs full-size capability, but they still deserve the strength and true-truck attributes that come in larger models.”

While the so-called “personal use” market for full-size pickups has largely gone away, Chevrolet is betting that at least some midsize truck buyers will opt for a Colorado for the cool factor. And it hopes to back that up with an assortment of performance and appearance options, such as the sporty Z71 package, while also loading up the sort of high-tech infotainment features young buyers crave in today’s passenger cars. An eight-inch touchscreen is available.

Other potentially appealing features range from the 13 tie-down posts in the pickup bed to the standard rear bumper step-up and rearview camera. Other safety features include standard electronic stability control and optional land-departure warning and forward crash alert systems.

That said, Chevrolet is starting out cold and staring into the face of its toughest competitor, here in the form of the Toyota Tacoma. It will have to work hard to gain traction in the midsize pickup segment. But as the only Detroit entry and one of only three models currently available, the upside is potentially huge.