Mopar Bridging the Gap Between Factory and Aftermarket 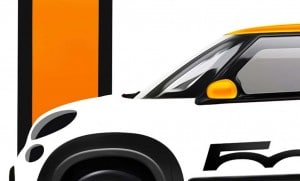 Mopar will reveal 20 customized models at the SEMA Show next month -- including the new limited-edition Mopar '14 model.

The “other” Chrysler Group brand will be making a big splash when the annual SEMA Show rolls into Las Vegas next month, Mopar planning to reveal 20 different customized versions of various Chrysler, Dodge, Ram, Fiat and SRT models – and perhaps a unique vehicle of its own, hints MOPAR president Pietro Gorlier.

For years operating in the shadows as little more than the supplier of replacement wipers and wheels, Mopar has begun to emerge as a distinct brand – and profit center — of its own since Chrysler was taken over by Fiat following the U.S. maker’s 2009 bankruptcy.  And observers say that’s no surprise. The automotive aftermarket has become big business, generating at least $30 billion in sales annually, according to the Special Equipment Marketers Association which sponsors the annual Las Vegas show.

Mopar isn’t abandoning its traditional business. If anything, it has expanded its operations as the provider of replacement parts for the combined Chrysler-Fiat alliance. But it is also positioning itself as a powerhouse rival to traditional aftermarket vendors, whether producing parts of its own or sourcing them from outside vendors. 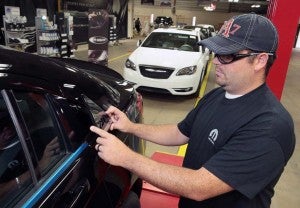 And Mopar has a potentially huge advantage over the competition in that it can offer to customize Chrysler products at the point of sale. Someone buying a new Dodge Challenger or SRT Ram 1500, for example, can add such goodies as high-performance tires, racing stripes, bedliners and electronic tracking systems, and have everything installed and ready to go when they take delivery.

“Studies show that 49% of customers industry-wide are willing to accessorize their vehicle when they buy them,” explains Gorlier, adding that another 11% plan to do so later.

(Hyundai rockets into SEMA with a 1,000-hp version of the Genesis Coupe. Click Here to check it out.)

To expand the appeal of adding accessories in front, Mopar-affiliated dealers pitch the fact that if a customer orders accessories up-front they may be eligible to be financed under the same loan as the vehicle itself, potentially saving motorists big on lower interest rates. And the customized vehicles continue to be covered by the factory warranty – including the new Mopar accessories.  That’s not always the case with parts sold through aftermarket vendors or installed by private tuner shops.

“We want these cars to go out with the same quality as you get from the factory,” stresses Gorlier.

(Six Mopar-customized Jeeps head out on the Rubicon Trail. Click Here to join the ride.) 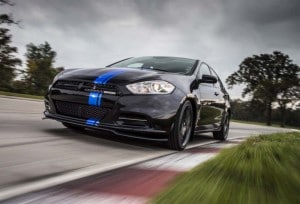 Only 500 copies of the Mopar '13 Dart were produced last year.

To support its aftermarket program, the parts division has opened seven different Mopar Custom Shops across North America, including its largest in the Detroit suburb of Warren, Michigan, which expected to handle as many as 90,000 vehicles this year.  An eighth Custom Shop is being planned for Mexico.

Each Custom Shop is designed to handle the products from one or more of Chrysler’s nearby assembly plants.  The facility in Warren, for example, handles the Ram pickups and Chrysler 200 sedans produced at two factories nearby.

A tour of the suburban Detroit facility found it nearly as frenetic as a typical assembly line, but while the operation has incorporated some of the high-tech tools of a traditional factory, much of the work is still done by manual labor.  Among the most popular features with Ram buyers are spray-in bedliners designed to resist damage when hauling heavy loads, outside steps that make it easier to climb into the big trucks and, of course, any manner of stripes and other customized appearance packages.

In fact, Mopar is making a big chunk of change by offering specialized packages appealing not only to the traditional performance market but sports fan – who can order special editions linked to some favorite teams – but also regional packages such as one sold through Texas truck dealers.

The Custom Shops can handle a wide range of accessories, though not everything. They can’t install so-called “crate engines,” for example.

But in general, says the executive, “Give us the request and we can probably do it.”

Mopar’s catalogue of parts and accessories has been growing rapidly in recent years, the brand adding about 1,500 new items annually, according to Gorlier, who notes, “We average 100 accessories for each new car we launch.”

The parts division now works closely with Chrysler designers and engineers, often getting in on new vehicle programs as much as three years before launch to make sure there’s a broad line of accessories available the moment a new model is launched.  And to decide what parts to offer, MOPAR planners spend a significant amount of time checking out the latest trends, working with partner vendors and visiting shows like SEMA to generate ideas and expand the parts catalogue further.

It also uses shows like the SEMA convention to illustrate what it has to offer. The 20 Mopar-modified vehicles will serve as the centerpiece of Chrysler’s 15,000 square-foot display at the Las Vegas Convention Center.

“We developed these Mopar-modified vehicles to inspire ultimate customization,” suggested Gorlier. And during a tour of Warren, Michigan Custom Shop he drops a hint that Mopar could have a big announcement to make at SEMA.

In recent years, Mopar has taken the unusual step of branding a unique model of its own each year, starting with the Mopar ’10, a uniquely customized, limited edition version of the Dodge Challenger.  Demand nearly doubled

A new “buzz model” is due for 2014 and though Gorlier just smiles when asked what’s in store, he hints that SEMA could be a very good place to see what Mopar has in store.