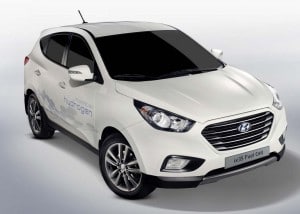 Hyundai is already selling the iX35 hydrogen car in Europe and prepping the little crossover for the American market.

Hyundai is betting heavily on the world’s lightest gas – with U.S. sales of its new hydrogen fuel-cell vehicle set to begin in the U.S. early next year.

Sometimes described as “refillable batteries,” fuel cells produce nothing but water vapor in their exhaust and are one of only a handful of ways to meet the stringent zero-emission vehicle, or ZEV, requirements set for California and other parts of the world. But hydrogen power has its own drawbacks, including the lack of a refueling infrastructure that experts warn could take years – and cost billions of dollars – to overcome.

“We are studying the market to see which will work better,” Moon-Sik Kwan, president of Hyundai Motor Group’s R&D Division, tells TheDetroitBureau.com, noting that while Hyundai is focusing on hydrogen, its South Korean partner Kia is preparing a battery-electric version of its little Soul crossover. 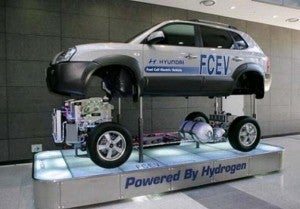 A cutaway of Hyundai's hydrogen technology at the maker's museum outside Seoul, Korea.

Hydrogen fuel cells have been around since the mid-1900s, though they were little more than a scientific curiosity until the Apollo space program, when they were tapped to provide power on the moon mission capsules. Fuel cells gained proponents within the auto industry during the 1990s, only to see the spotlight shift to battery power in the new millennium. But now, as the range and cost limits of lithium-ion technology becomes increasingly apparent, fuel cells have again gained a following.

Toyota has promised to put a fuel cell vehicle into limited production by 2015, Honda following up soon after with a replacement for its earlier FC-X Clarity model. General Motors and others could begin production of their own hydrogen cars later in the decade.

(GM partners with the US Army on fuel cell research. Click Here to learn more about the program.)

Hyundai, however, plans to beat them all to market. It is already providing a limited test fleet to government buyers in Denmark and other parts of Europe. And the Korean carmaker will expand the program when the first of its fuel-cell models reached U.S. showrooms in early 2014, notes Dr. Kwan.

Even so, volumes will be relatively modest compared to the traditional Hyundai product line, with total worldwide sales likely to reach perhaps 1,000 over the next three years, the Korean carmaker’s research chief cautions.

Several factors will limit demand, including price. The hydrogen model is currently being sold in Europe for about $150,000. By the time it reaches the U.S., the goal is to trim that to somewhere between $50,000 and $100,000, according to Dr. Kwan, though the final figure has yet to be set.

That price tag reflects not only the low volume of production but the complex nature of hydrogen-based technology, a fuel cell “stack,” among other things, requiring the use of significant amounts of rare metals like platinum. These materials act as catalysts, helping combine lightweight hydrogen with oxygen from the air which, in turn, produces a flow of current that can drive the same motors used in an electric vehicle – which is why proponents refer to the technology as a refillable battery.

(Toyota to deliver over 300 mile range with its planned fuel cell vehicle. Click Here for the story.)

Refillable, yes, but there are currently few locations where hydrogen is available, something that Hyundai’s research boss acknowledges is the most severe challenge to expanding the use of hydrogen power. Asked if Hyundai might set up hydrogen fueling stations, much as Tesla Motors is setting up a “Supercharger” battery charging network across the U.S., Dr. Kwan says, “No.”

“The investment is huge,” he stresses, asserting that “One or two car companies could not it by themselves. Only governments could do this.”

Indeed, several European governments have committed to doing so, notably Germany which has plans to set up a nationwide network of alternative power stations where motorists could both charge up their battery cars and access hydrogen fueling pumps.

California has also approved funding for a hydrogen program that will soon establish around a dozen pumps in the Greater Los Angeles area and perhaps 100 or more stations across the state in the years to follow.

Hyundai and other backers are betting that by offering hydrogen vehicles, even in limited numbers, they will break the classic chicken-and-egg syndrome. If early buyers warm to the technology, they contend, the energy industry will then make the necessary investments to expand availability of hydrogen on a nationwide level, encouraging the auto industry to offer even more fuel cell vehicles.