2015 Mercedes-Benz C-Class to Get A Major Upgrade

Wave of new technology will include all safety gear now available on the big S-Class. 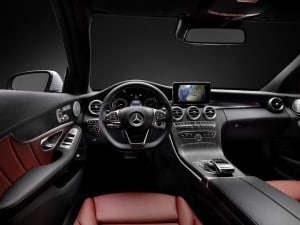 Mercedes-Benz is updating its C-Class for next year, but it offered a little early peek at the interior.

Following the update of key models like the S- and E-Class lines, Mercedes-Benz will offer up an all-new take on the little C-Class, it’s top-selling entry, a year from now.

But the maker is offering up a first sneak peek at what it has in store with these teaser images.  The emphasis, it suggests, will be in putting more “class” into the 2015 Mercedes C-Class interior. But the Teutonic maker also hints that the new luxury model will lose a significant amount of weight even while gaining a lot more content – including all safety technology on the current E- and S-Class models.

The timing couldn’t be better – unless Mercedes were able to pull the launch of the 2015 model a bit forward. The compact luxury niche has become both one of the market’s fastest-growing – and competitive – segments, with a range of offerings from manufacturers such as Audi and Lexus, as well as mainstream makers looking to push more up-market. 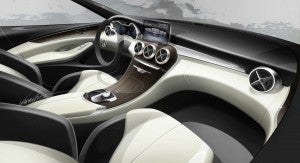 Part of the update will include a new interior.

For the moment, Mercedes is keeping the wraps on the 2015 C-Class exterior redesign, though it is expected to lift some of the design cues first seen in the 2014 remake of the flagship S-Class, such as the bigger grille and oversized Mercedes tri-star, more sculpted sheet metal and less over-the-top fender flares.

What the images Mercedes has offered up of the 2015 C-Class shows it pressing to build on its perceived strength as the most elite of the German luxury brands. But there’s also an apparent desire to make the new C-Class a bit more sporty. It seems like the more BMW wants to adopt the sophistication of a Mercedes, the more Mercedes wants to steal some of the thunder from the maker of the self-styled “ultimate driving machines.”

The new 2015 C-Class, gushes the Mercedes release, “comes across as clear, sensual and with a host of new unusual styling features. At the same time it exudes sportiness – but with sensual shapes and high-grade materials, thus epitomizing contemporary luxury.”

What does that translate into? A new center console designed to open up the compact interior, and a free-standing center display. There’s a new mix of more elegant metals and “organic” materials.

This sketch shows some of the updates coming for the new C-Class.

From a tech standpoint, the maker appears to be trying to address long-running concerns about its COMAND infotainment system with an “innovative” touchpad controller that will permit a motorist to operate basic functions through finger gestures. The new system also will provide haptic – or touch – feedback when using the touchpad.

The new C-Class will follow the path blazed by a number of its direct competitors, and even little Mazda with the new Mazda3, adding a new head-up display to provide key information such as speed, speed limit guidance, navigation instructions and more, seemingly floating in space out front of the driver.

While we’ll have to wait to see the new 2015 Mercedes-Benz C-Class styling, the maker hints of what’s in store by promising to reduce the overall weight of the next generation by 221 pounds compared to the current offering. Among other things that will come from aggressive lightweighting efforts that include the use of a new aluminum hybrid body, Mercedes says, calling the new model, a “lightweight construction trailblazer.” The body and bodyshell alone will be 154 pounds lighter.

The reduction in mass is all the more impressive considering the added content – such as that HUD system – going into the 2015 C-Class remake.

To give the new model a bit more sportiness, buyers will be able to upgrade the new, standard-issue 4-link front axle suspension with Mercedes’ Airmatic air suspension on both axles. The system offers continuous variable damping and is expected to allow a driver to switch among several driving modes.

One of the most significant announcements underscores the ongoing migration of high-end technology into more mainstream product lines. The 2015 Mercedes C-Class, the maker says, will offer – either as standard gear or in option form – “all of the available passive and active safety technology from the S-Class and E-Class.”

That should include such technologies as a high-speed collision mitigation system and a low-speed system that can bring the vehicle to a quick halt if a vehicle or pedestrian crosses in front of it.

The next-generation Mercedes C-Class will be launched in autumn 2014 at the maker’s assembly plant in Tuscaloosa, Alabama. While Mercedes isn’t releasing details yet, expect to see the new model offered with a new 4-cylinder powertrain produced by its alliance partner Nissan at a factory in Decker, Tenn. We’re sure to hear more about that well ahead of the upcoming launch.