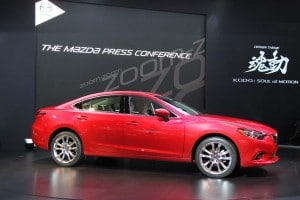 The diesel version of the new Mazda6 is expected to top 45 mpg.

Mazda and diesel fans alike are in for a disappointment. The maker has confirmed it is pushing back by about six months the planned introduction of its new Mazda6 SkyActiv-D model as it completes “testing and certification” of what had been on tap to become the only diesel powertrain offered by a Japanese automaker on a model sold in the U.S.

After decades on the backburner, diesel power has begun to gain ground rapidly in the U.S. market, and even with the delay, the total number of vehicles equipped with the technology is expected to double during the 2014 model-year, according to various analysts.

“The on-sale date for Mazda6 SKYACTIV-D clean-diesel has been moved to late-Spring 2014, to accommodate final emissions testing and certification,” said Mazda in a statement e-mailed to TheDetroitBureau.com. The maker said, however, that it is “pleased with the ongoing development” and that more information “will be available closer to the on-sale date.”

The news will not have any impact on Mazda’s diesel-powered race campaign, and the motor sports program has been scoring some impressive podium appearances – a significant success for a program based around an all-new engine. 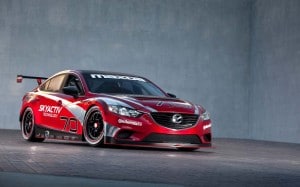 Mazda's new diesel racer got its first trial by fire at Daytona and has since had a good year..

Mazda launched a complete remake of the Mazda6 midsize sedan for 2013, dropping its old four- and six-cylinder engines in favor of, initially, a new SkyActiv four-cylinder gas engine, with the diesel version to follow early in the 2014 model-year.

SkyActiv is a broad concept for the maker, taking in a variety of development efforts on the vehicle platform itself, as well as a new powertrain family.  Mazda’s new I-4 gas engine delivers significant improvements in fuel-economy, but the Japanese maker has promised the diesel would come in with fuel-economy numbers more in line with a gas-electric hybrid.

The modern diesel is significantly different from the oil burners of yore, smoother, quieter, cleaner. That has helped the technology capture about half of the European auto market. And many expect significant growth in the U.S., as well.

Mazda is just one of a number of manufacturers moving back into the diesel realm in the States.

The technology reached its peak in the early 1980s as Americans raced to drive up mileage in the wake of the ‘70’s twin oil shocks. But the diesels of that era were slow, noisy and rough-riding. Worse, some diesel packages offered by General Motors were prone to catastrophic failure, belying the technology’s reputation for durability.

(Click Here for a complete round-up on the Frankfurt Motor Show.)

By the turn of the Millennium, diesels had all but vanished from U.S. roads. But several German makers soon began reintroducing the technology and today, about 25% of the diesels Volkswagen of America sells use the high-mileage powertrains. Sibling brand Audi, meanwhile, is launching three diesels this autumn, a fourth to follow after the New Year.

General Motors introduced its first passenger car diesel in a quarter century, the 2014 Chevrolet Cruze Diesel, and will likely expand its truck offerings. Chrysler, meanwhile, is adding diesel power to both the Jeep Cherokee and the Ram 1500 models this year.