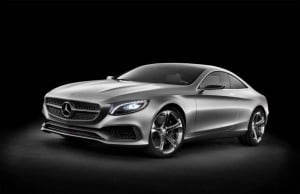 This year’s Frankfurt Motor Show is awash with concept vehicles. Some, like the Lexus LF-NX, are simple design exercises designed to gauge consumer reaction. But with the Mercedes-Benz S-Class Coupe Concept, what you see is what you’ll soon get.

Well, almost. There are a few fanciful design details and on-the-edge technologies not likely to carry over into production, but the S-Class Coupe will reappear with only the most minor tweaks as the replacement for the aging Mercedes CL-Class.

No surprise, the concept features a decidedly more aggressive and adventurous design than the S-Class sedan that was introduced only a few months ago. The show car features the fanciful perforated grille that we first saw on the CLA-Class concept, and overall appearance is more sporty than the sedate S-Class sedan, which is to be expected. 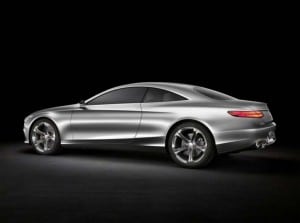 Many of the amenities on the S-Class coupe concept will find their way onto a production model.

“The Concept S-Class Coupé combines tradition and emotion, and is a symbol for the embodiment of our design style of sensual clarity,” says Gorden Wagener, vice president, Design at Daimler AG, adds. “The perfected design with self-assured style and the highly exclusive appointments make the coupé a true design icon and an expression of modern luxury.”

Beyond the grille, among its more distinctive features, the S-Coupe Concept adopts a sweeping roofline that might bring to mind the Mercedes CLS – minor the rear doors, of course. The short rear decklid and lack of window pillars also brings the CLS to mind.

Inside, the prototype is very much of the new S-Class family, starting with the sedan’s dual 12.3-inch reconfigurable digital displays. In fact, the coupe gets yet another, lower touchscreen that can be used to display various timepieces. But it picks up on the hundreds of LED cockpit lights that provide an elegant and widely customizable interior ambience.

An interesting touch is the “black diamond” surface of the center command unit on the center console. This jewel-like detail was crafted through the use of a chemical vapor deposition process to deposit pressure metals on the base material at temperatures reaching 1,830 degrees. 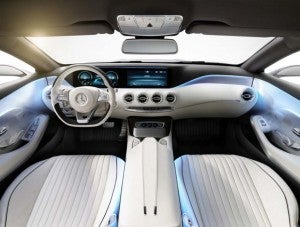 The interior of the S-Coupe concept is awash in luxury appointments.

Like the sedan, the S-Coupe Concept adopts a wide range of what Daimler CEO and Mercedes brand boss Dieter Zetsche calls “neat-autonomous driving. That includes a “sensor fusion” that combines inputs from a range of radar, sonar and infrared sensors, as well as a stereoscopic camera system mounted behind the rearview mirror.

Among other things, that technology can spot a pedestrian or larger animal walking in the vehicle’s path and bring the coupe to a quick halt. The camera system also powers the Magic Body Control suspension that instantly adjusts to respond to changing road conditions.

In concept form, the Mercedes S-Coupe Concept is powered by a twin-turbo 4.6-liter V-8 making 449 horsepower and 516 pound-feet of torque. If the sedan is any indication, this package will be the makings of an S550 Coupe – at least if Mercedes drops the CL convention and returns to the old strategy of sharing the S designation with all of the flagship model’s body styles.

(Click Here for a look at the first drive in the Mercedes E250 BlueTec 4Matic.)

Don’t be surprised to see one or more AMG variants. What’s uncertain is whether Mercedes will also deliver a hybrid package. The Frankfurt Motor Show also brought out the new Mercedes S-Class Plug-in sedan.

While Mercedes didn’t say when to expect the production version, the likely answer is “soon,” now that the S-Class sedan is getting ready to reach dealers.