Audi adds another option to its new entry-level line-up. 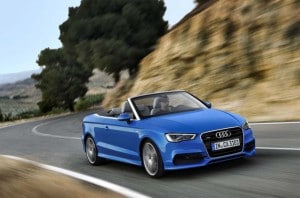 The Audi A3 Cabriolet for 2014 continues the makers expansion of its product line-up in the U.S.

We’re expecting to hear a lot about the Audi Sport Quattro Concept, already generating the buzz likely to make it one of the big hits of this week’s Frankfurt Motor Show. But let’s clear the air…the luxury maker has some other interesting offerings to show us, including the new 2014 Audi A3 Cabriolet.

It will become the latest in a growing line-up of entry-level body styles replacing the old A3 model, starting with the wagon we saw in Geneva earlier this year, followed by the A3 sedan developed specifically for the American market and unveiled at last spring’s NY Auto Show.

The fourth model in the new A3 range will stick with a conventional fabric roof that Audi promises can be opened and closed in a mere 18 seconds – and which will operate at modest speeds allowing a driver to get out of the rain without having to pull over. The top will be completely concealed, Audi adds, when retracted.

Though a bit lower, the new A3 Cabrio is otherwise larger in every other dimension than the outgoing convertible – in line with the expanded size of the new sedan. Curiously, Audi claims the added inches helped created “sleeker profile,” while also making it possible to completely conceal the convertible top. Total length grows about seven inches, to roughly 172 inches. 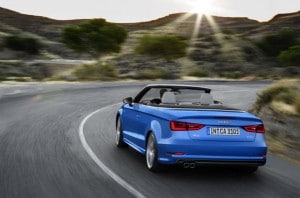 Audi promises that the top on the new A3 Cabriolet can be lowered in 18 seconds.

The new design features the now-familiar single-frame radiator grille flanked by Audi’s flat headlamps. Depending on the model, those will be halogen or xenon lights, though LEDs are also offered as an option.

One of the more notable – and likely well-received additions to the 2014 model will be the availability of Quattro all-wheel-drive. That should be particularly important in Snowbelt regions of the U.S. where you can barely find a luxury car these days without AWD.

Also new this generation will be an S3 performance model, this one featuring a 300-horsepower Quattro driveline that Audi claims will deliver 0 to 100 kmh (0 to 62.5 mph) times of just 5.4 seconds.

Worldwide, the A3 version will be offered with three other engine options, 140 and a 180-hp gas powertrains, and a 150-hp turbodiesel.

Don’t expect an econobox. The new Audi A3 line promises to be loaded with goodies when it finally makes the trip to U.S. shores, including the latest Audi infotainment system and even 4G/LTE high-speed Internet connectivity.