Honda Accord is America’s Most Stolen Vehicle 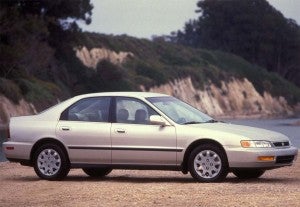 The 1996 Honda Accord was the single most frequently stolen vehicle in America during 2012.

The Honda Civic was the nation’s most frequently stolen vehicle, while the maker’s Civic model came in second on the annual Hot Wheels report from the National Insurance Crime Bureau.

The trade group revised the latest version of its study, no longer focusing on individual model-years but combing all years of a particular make and model. The NICB now also lists the top new vehicles that were stolen in 2012.

The latest Hot Wheels study coincides with what appears to be a reversal of an eight-year downward trend in car thefts. The NICB expects thefts to rise by about 1.3% in 2013.

That upward trend in car thefts has been spotted by other crime-fighting and reporting groups, such as the Highway Loss Data Institute. That trade group, also known as HLDI, also issued a most-stolen list last month, in this case putting the Chevrolet Silverado on top. But its study focused not only vehicles that were driven or towed away by thieves but also included theft of components and personal goods. Perhaps not surprisingly, pickup trucks accounted for four of the top five models because thieves often grab cargo and tools from the pickup beds.

The new NICB study focuses specifically on vehicles that were actually stolen in 2012 and the Honda Accord far and away led the list with a total of 58,596 falling victim last year, followed by second-place Civic of which 47,037 were stolen.  By comparison, just 26,770 of the third place Ford F-Series pickups were nabbed by thieves.

In the past, the Hot Wheels list would have revealed that older Accord and Civic models, generally those produced before the year 2000, that were stolen most frequently. A closer look at the data suggests the Japanese maker has been working hard to reduce the theft problem with later models through the use of smart keys and technology that disrupts the ignition system if a thief tries to hotwire the car.

A breakout shows the 1996 Honda Accord was the nation’s single most frequently stolen individual vehicle by model-year, at 8,637 thefts last year. But thieves rarely appear to make off with new Accords, according to the NICB.

And Honda had not a single model in the list of the most stolen 2012 model-year vehicles. According to the NICB, the dubious distinction of leading that list fell to the Nissan Altima at 921, followed by the Chevrolet Impala at 778, and another Chevy, the Malibu at 727.

(Minicars and muscle cars experience the most insurance claims. Click Here for more.)

The Altima was one of only three models to be on both the overall most-stolen list and the list of most-stolen 2012 model-year vehicles. The others were the Ford F-Series pickups and the Toyota Camry.

The bad news, according to the NICB, is that federal data shows a reversal of the eight-year decline in car thefts. On the positive side, the FBI’s preliminary tally shows 724,672 vehicles were stolen last year, less than half the 1,661,738 peak in 1991. Experts credit a mix of new, anti-theft technologies along with increased enforcement for the decline.