Georgia is the Most Expensive State to Operate a Car

But Oregon is the cheapest, according to new study. 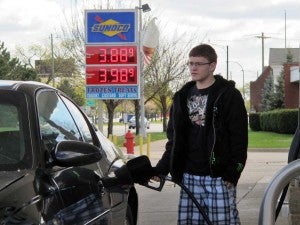 Gas prices are just one of the factors included in the new study of vehicle operating costs.

The cost of buying and owning a vehicle can vary widely, and not just because of the car or truck you choose but also according to where you live. And a new study finds that Georgia has become the most expensive state to operate a motor vehicle in – while Oregon is the most affordable.

The gap is substantial, a typical motorist likely to spend twice as much to keep a vehicle running in the Peach State once factors such as gasoline, insurance, repairs, taxes and fees are added in, found website Bankrate.com.

The results of the new study might come as a surprise, particularly with Georgia landing at the top of the list – above more urban states such as New York, New Jersey and California. Actually, the Golden State wound up second on the list, at an annual $3,966 in automotive operating costs.

Rounding out the top five were:

Several factors seem to unite the most expensive states.  With the exception of Rhode Island, they’re big and motorists tend to have to drive a lot.  They generally lack for mass transit alternatives and they have above-average gas prices and insurance costs.  Georgia, in particular, has the highest automobile taxes and fees in the country, notes the new Bankrate.com report.

Georgia and California also have some of the highest repair costs in the country, according to a separate study by CarMD.com that was released last June, though Wyoming drivers fared better than average in that category.

One thing that most recent studies agree about is that the cost of ownership is going up at a steady pace – about 2% this year over 2012, according to data analyzed by the AAA. The insurance and travel organization found insurance rates likely to rise by 2.8% for 2013, while its own data predicted a whopping 11.3% jump in maintenance and repair bills.

(Click Here to find the least — and most — expensive states for car repairs.)

Those figures are averages and, as with fuel costs, registration fees and other automotive expensives, the numbers are expected to vary widely from state-to-state.

The national average for operating a vehicle is $3,201, according to Bankrate.com, and Oregon lands at the bottom of the list, just $2,204 annually. Residents of the Beaver State benefit from the lack of a state sales tax, low auto insurance costs – and the fact that they drive, on average, 16% fewer miles than the national average.

The next four lowest-cost states are:

You can find results for all 50 states at: http://www.bankrate.com/finance/auto/car-ownership-costs-by-state.aspx.